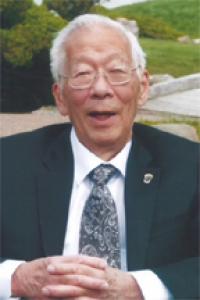 Alberta has lost a native son. Robert Hironaka died peacefully on September 22, 2014.
\”You get out of life what you put into it. If you don’t put into it you don’t get much out of it\”
Robert Hironaka –
Alberta Order of Excellence 2012
If you were to ask the many that Robert came in contact with throughout his life, they would say that he lived life to the fullest – a lifetime dedicated to excellence and service. Robert was born on January 18, 1928 in Raymond, Alberta to Yoichi \”Harry\” and Tsuki (Kanehiro) Hironaka. His sister Fusae and brother, Akira (Yasuko, deceased), predeceased Robert. He is survived by his brothers Tucker (Sachi), James (Aya, deceased), Marshall (Sally) and Arthur (Pat) as well as by his two sisters Florence Senda (Yosh, deceased) and Misae Masuda (Aki). As many early immigrants, Robert’s father Yoichi taught his children the importance of family and the value of education. After receiving a diploma from Olds College of Agriculture, Robert went on to complete his Bachelor of Science and Masters of Science degrees from the University of Alberta and his Ph.D. from the University of Illinois. In 1950, Bob met Shizuko (Susie) Kohashigawa at a house party in Edmonton, and married in 1955. They had three children, a son Wesley (Colleen Hierath) and two daughters, Lorelei, and Tamiko (deceased in 1982). Sadly, Susie passed away in 1995. Robert always missed her dearly, and would tell everyone about his beautiful wife. Bob dedicated the Rotary Paul Harris Award in memory of Susie. Bob and Susie’s legacy lives on in their six grandchildren – Wes’ girls Haley, Shea and Quinn, and Lorelei’s boys Jesse, Daniel and Zachary. In 1959, Dr. Hironaka joined the staff of the Lethbridge Research Centre. His research in the area of animal nutrition gained him international acclaim. He often represented Canada at symposiums and joint research projects around the world. Robert’s distinguished work has been recognized in many ways. Bob retired from the Lethbridge Research Station in 1991. This would be the start of a life dedicated to community service. As a founding member of the Nikka Yuko Japanese Gardens, Bob spent many days enjoying the garden as it matured. He continued his work with the Buddhist Church; the Lethbridge Twinning Society; Communities in Bloom; Rotary and many other community projects. One of his greatest honors was in serving the University of Lethbridge as Chancellor from 1995-1999. Dr. Hironaka received many distinguished awards for his service work, including the Alberta Order of Excellence, a Doctor of Laws degree from the University of Lethbridge, and Foreign Minister’s Commendation of Japan for his promotion of Japan Canada Friendship. A fellow community leader describes Robert Hironaka as \”an exemplary ambassador for the University, Lethbridge and Southern Alberta, and in fact, all of Alberta,\” In addition, \”his contributions have made this community a better place to live, work and study.\” Bob enjoyed living his life simply, with great generosity and integrity. Robert’s grandson Jesse puts it simply: \”Always eager to have an animated conversation with anyone, [my grandfather] treated everyone fairly.\” Jesse goes on to say, \”He\’d always be very concerned with our health, and he personally made us various concoctions of vitamins.\” Bob was always there for his family and his many treasured friends, making an extra effort for family reunions or to help anyone out in some small way. Everyone enjoyed his optimism and his wonderful sense of humour. A private service will be held at 10:30 AM at the BUDDHIST TEMPLE OF SOUTHERN ALBERTA, 470 — 40 St South, Lethbridge. Interment to follow at Mountain View Cemetery. Colleagues, friends and family are cordially invited to reminisce about Robert at his favourite place, the Nikka Yuko Japanese Gardens, following the burial service. In honour of Dr. Hironaka, the Gardens will be closed during the funeral ceremony, and will reopen its doors at no charge to all for the remainder of the day. The Hironaka family warmly welcomes you to enjoy the beautiful gardens with them in the afternoon. Rain or shine, bring an umbrella, as Bob would suggest. Robert, Bob, Jisan — We will miss your caring ways and your smile. In lieu of Koden and flowers donations may be made to the Nikka Yuko Japanese Gardens, PO Box 751 Lethbridge, Alberta T1J 3Z6.

One Condolence for “HIRONAKA Robert”