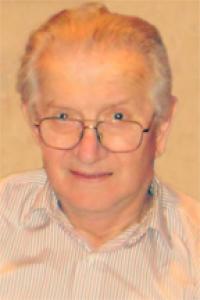 1930-2014
GEORGE SCHLICHTER, beloved husband of Gerda passed away peacefully at home on Tuesday, September 23 at the age of 84. George was born in Barcs, Hungary on January 11, 1930, the only child of Adam and Elizabeth Schlichter. He moved to Canada in 1951, settled in Lethbridge and was followed by Gerda in 1953. He was a skilled craftsman, trained as a furniture maker in Europe and established a custom home building business in Lethbridge. He has laid down his tools, but his accomplishments are featured in many fine homes throughout Southern Alberta. George will be sadly missed by Gerda Schlichter, his wife of 61 years; his children: Edith (Doug), Henry (Lori), Don (Loretta) and Gary (Lisa) and his twelve grandchildren: Lana, Lucy (Chris), Kevin, Adam, Miyah, Amanda, Sadie, Mason, Justine, Megan, Savannah and Bronson, and one great- grandson, Otto. Rest in peace George. The Funeral Service will be held on Friday, September 26, 2014 at 1:00 p.m. at CHRISTENSEN SALMON GENERATIONS FUNERAL HOME, 703-13 Street North, Lethbridge with Deacon Bill Young officiating. Interment to follow in the Mountain View Cemetery, Lethbridge, followed by a get together at Eagle Hall, 631 — 13 Street North, Lethbridge. Flowers are gratefully declined. Those who wish may give to the Heart & Stroke Foundation of Alberta, Box 2211, Lethbridge AB, T1J 4K7.

One Condolence for “SCHLICHTER George”