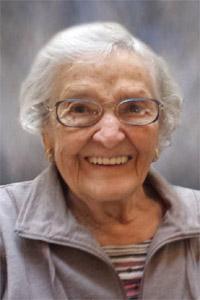 1928-2014
Our mother, MURIEL (MOE) ROSALIE GLOVER passed away on as fine an autumn day as one could expect in Southern Alberta. Muriel died on Monday, September 29th, 2014 at the age of 86 in beautiful surroundings with her loved ones at her side. Muriel leaves to mourn her son Tom Glover (Andrea); daughters Jayne Ference and Barb (Francis) Konrad and her beloved grandchildren — Walker, Kylen, Katie and Elizabeth. ‘Aunty Moe’ will be missed by those who regarded her as their second mother – Merrill Gilraine (Wayne); Brenley Ogden (Karl, Lindsey, Karmen), Paul Shmygol, Mark Shmygol (Carol, Scout & Billy); and especially her dear niece Dilene Sorochan (Don & David) as well as many other family members. She will be greatly missed by her close friends Phyllis & Bob Alexander, Bev & Bill Robertson, who supported her daily over many years. Also mourning her passing are many other long-time friends. Muriel was born in Yorkton, Saskatchewan in 1928 to Mary Eliza (Montgomery) and Roslyn Young. She resided in Yorkton for 10 years and then moved with her family to Carmen, Manitoba where she later met her husband Charlie (who predeceased her in 2012). She was also predeceased by her two brothers and one sister. Our mother had an incredible zest for life — she was interested in everything and everyone. Moe was loving, funny, feisty, and most of all, a generous person who did things for people for the simple joy of giving and never expected anything in return. The world has lost a special person – our mother will be missed very much but she knew this time comes to us all and we must go on as she would have wished (or in her case, ‘demanded’) us to do so. The family would like to thank all those who in turn, extended a hand to mom over the course of her life and especially during these last weeks. Thank you to friends, family and neighbours for your support and to the compassionate medical staff for their excellent care of our mother at the Chinook Regional Hospital and St. Michaels Health Centre Palliative Care. Muriel will be laid to rest in Roland, Manitoba alongside her husband. Tributes & Memories will be shared at CORNERSTONE FUNERAL HOME – 2800 Mayor Magrath Drive South, Lethbridge, AB on Saturday, October 4, 2014 at 2:00 P.M. with a light lunch to follow. "The loss of a mother can never be replaced, but the love of a mother can never be lost."

One Condolence for “GLOVER Muriel”