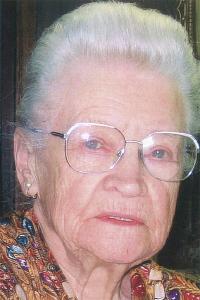 1926 ~ 2014
On October 10, 2014, Helen Blair was called home to the waiting arms of our Lord and Savior after a short battle with cancer. She was 88 years of age. She was born in Osler, Saskatchewan on March 7, 1926 to Henry and Maria Martens, third of twelve children. She moved with the family to a homestead in Whitebeech, SK, where she entered her teenage years. She was hired out neighbors to as a babysitter and housekeeper to help with the family finances. She also tried to start her education there, but the times and the winter weather were harsh and the one room school was a mile away, so an education was not easy to attain. In 1945 she moved to Southern Alberta with the family, and started a career as a Nursing Aide. In 1967, she earned her certificate and particularly enjoyed working in pediatrics, as she liked children. On February 15, 1948, she married Duncan Blair, a station agent for the CPR. This job took them to several towns throughout Alberta. While in East Edmonton, Helen trained as a beautician and was a co-owner of a hair dressing shop. After several moves, they ended up in Fort McLeod and took root on an acreage in Orton. This was home for many happy years. She was proud of the fact that she trained for and got her Class 1 drivers license, although she may have never used it. In 1974, she got a certificate for woodworking from the Continuing Education at the Lethbridge College. This knowledge gave her the skill to build new kitchen cabinets for her house, as well as many other small cabinets she desired. Her handiwork in sewing, crocheting, Petite-Point and other crafts won her many achievement ribbons at trade and craft shows. She was a determined person and usually finished what she started. Helen was predeceased by her parents Henry & Maria Martens, her husband Duncan, infant brother Joh; sister Tena Schulz and brothers Ben, Jake and Henry, as well as several nieces and nephews. She leaves to mourn her passing: sisters Mary (Pete) Lowen, Sarah Gaskel, Susan Kimura; brothers George (Ilene), Dave (Ruth) and Bill (Karen) and many nieces and nephews. A Memorial Service will be held at 2:00 pm on Thursday, October 16, 2014 at MARTIN BROTHERS RIVERVIEW CHAPEL, 610-4 St. S., Lethbridge, AB. Send condolences at www.mbfunerals.com.