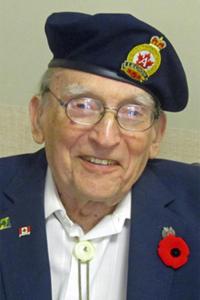 1916 ~ 2014
Mr. Evan Gushul of Lethbridge, passed away peacefully at Edith Cavell on October 7, 2014 at the age of 98 years. Evan was born July 28, 1916 to parents Thomas and Lena Gushul in Coleman, AB. During his life, his two main passions were photography and music. As a photographer, he worked for the Government of Canada Research Station in Lethbridge. As a musician, he was one of the founding members of the Lethbridge Symphony, where he played violin and viola for some 14 years. Evan is survived by two step sons, Wallace & David, and their families, which include six grandchildren; nine great grandchildren; as well as three nephews and one niece. He was predeceased by his wife Hazel, his parents, and his three sisters; Nadia, Paraska and Polly. To all that knew him, he was a kind and generous man. We know he will be playing his violin in Heaven, or taking pictures of the fall colours or next sunset. A Memorial Service will be held at 2:00pm on Saturday, October 18, 2014 at MARTIN BROTHERS RIVERVIEW CHAPEL, 610-4 St. South, Lethbridge, AB, with Reverend Trevor Potter, officiating. Send condolences at www.mbfunerals.com.