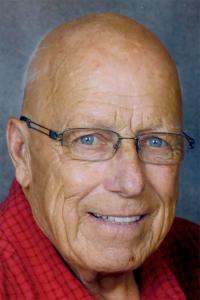 John (Larry) Porteous died peacefully at Penticton Regional Hospital on Friday, October 10, 2014. He is survived by his loving wife Carmen, son Ian (Alana) and daughter Lynn (Peter). He is also survived by his grandchildren Genoa and Oliver and his step grandchildren Thea and Eleni. Larry was born in Fort McLeod in 1943, he moved to Lethbridge as a young adult to make his career in the irrigation business; owning both Westcan and Porteous Irrigation. He retired to Naramata in 1990 where he became a glass artisan creating beautiful fused glass dishes which he loved selling at the Penticton Farmer’s market. A funeral mass will be held at St. John Vianney Catholic Church; 361 West Wade Ave in Penticton on Thursday, October 16, 2014 at 10:30 am followed by interment at the Naramata Cemetery and a reception at the OAP Naramata. The family wishes to thank Dr. Rob McIntosh, Dr. Dave Cleveland and Dr. Sarah Broder for the excellent care provided during his lengthy illness. If you wish to make a donation, contributions can be made to the Naramata Fire Department (Site 3, Comp. 7, RR #1, Naramata, BC V0H 1N0) as thanks to the first responders who assisted Larry on several occasions or to a charity of your choice. Arrangements in care of Everden Rust Funeral Services.