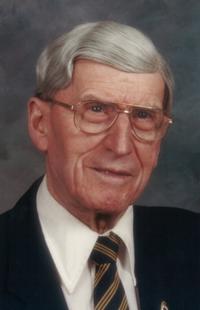 With sadness we announce the passing of CLARENCE REGINALD CLUFF, Sgt. (Rtd.) of Coaldale, at the Coaldale Health Centre on Saturday 11 October at the age of 99 years. Clarence is survived by his brother Andrew Cluff (Chilliwack, B.C.) and his sister Laura Jones (Saskatoon, SK.). He was predeceased by his parents, his sister Louise, and brothers Les and Doug. Born in 1915 near Matador, Saskatchewan, Clarence was the eldest son of John and Olive Cluff. From an early age, Clarence tended the farm with his father and established himself as a hard worker and an excellent horseman (though he preferred mules). Clarence was unable to pursue school past Gr. 8 but his quick mind, and his love of books and history set the way for a life-long passion for reading, learning, and collecting the books of G.A. Henty. Clarence fully lived his long life. He farmed, rode the rails, landed on D-Day, fought through France and Holland, raised prize-winning Angus cattle, served as a Commissionaire, volunteered at the Gem of the West Museum, travelled the world, was Honorary Gunner for the 20th Independent Field Battery, Lethbridge, and faithfully supported ill and failing friends. Throughout his life he demonstrated intelligence, perseverance, honour, decency, bravery, humility, a good sense of humour, and a willingness to always help others. Clarence’s service was recognized in 2012 with the Queen Elizabeth II Diamond Jubilee Medal and in 2014 when he was awarded the rank of Knight of the French National Order of the Legion of Honour. In his last days, Clarence was surrounded by many special friends, new and old. Clarence felt very blessed to have such good friends and we were blessed to have known him. He will be greatly missed by so many. We would like to thank Dr. Eric Mueller and all the staff at the Coaldale Health Centre for their compassion and tender care. A Prayer Service will be held at the Anglican Church of the Ascension – 2115 17 St. S., Coaldale, A.B. on Friday, October 17, 2014 at 7:00 P.M. A Funeral Service with Military honours will be held at the Anglican Church of the Ascension on Saturday, October 18, 2014 at 11:00 A.M. with the Rev. Canon Erin Phillips officiating. Cremation To Follow. Inurnment at a later date. In memory of Clarence, donations may be made to the Royal Canadian Legion, the Gem of the West Museum, the 20th Independent Field Battery Bursary Fund, or a charity of one’s choice.