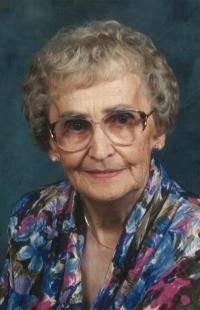 THORDIS TAYLOR, of Lethbridge, beloved wife of the late Gordon Taylor, passed away at the St. Michael\’s Palliative Care Centre on Thursday, October 16, 2014 at the age of 94 years. She is survived by her two daughters; Marilyn McKinlay of Lethbridge, and Carole (Jim) Olson of Palm Desert, CA, Four grandchildren Donald (Cindy) McKinlay, Ronald (Kim) McKinlay of Atlanta, GA, Syri (David) Martinusen of Lethbridge and Krista Olson of Fontana, CA, great grandchildren; Jasmine, Cody, Avie, Tyler, Eli, Addison, Brooke, Adam and Claire. Nieces, nephews, numerous cousins, and many dear friends in Canada, England, and Norway. She came to Canada with her parents, five brothers and one sister in 1922, and settled in the Sedgewick, Alberta area where her parents farmed. In 1942 she married Gordon Taylor and they had two daughters; Marilyn and Carole. Thordis was predeceased by her parents, husband and seven siblings. She was a member of Bethania Lutheran Church and served faithfully for many years until she moved to Lethbridge in 2000 to be closer to her family. She was an active member in the community and her friends meant a lot to her. She was devoted to her family and spent as much time as possible with them. She spent her last years in the Pemmican Lodge and enjoyed her home there very much. Most recently she lived at Legacy Lodge. She worshiped at Christ Trinity Lutheran Church and made many wonderful friends there, but missed her relatives and friends in Sedgewick and area. A Memorial Service will be held at CORNERSTONE FUNERAL HOME – 2800 Mayor Magrath Drive South, Lethbridge, Alberta on Tuesday, October 21, 2014 at 2:00 P.M. A Celebration of Life will be held in Sedgewick at a later date. If desired, memorial donations may be given to a charity of one\’s choice; Diabetes, Multiple Sclerosis, or the Lung Association. An Online Guestbook can be signed at www.cornerstonefuneralhome.ca.