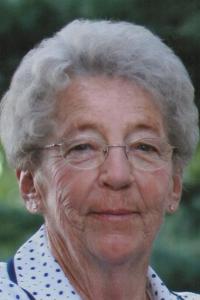 1933 ~ 2014
Mrs. Jean Delilah Schmitt, beloved wife of Gordon Schmitt, of Milk River, passed away peacefully on October 19, 2014, at the age of 80 years. She will always be much loved and greatly missed by those who knew her. Jean was born on November 17, 1933 in Calgary, to Carl & Jane Johnson. She was the youngest of 12 children, and was predeceased by her parents, 5 sisters, and 3 brothers. She is survived by her husband Gordon, daughter Winona (Lance) Doram of Longview, AB, three grandsons, Jaxon, Jagger, and Jace Doram, son Richard Schmitt of Vancouver, B.C., sisters Hazel Coleman of Magrath, Ida (Archie) Campbell of Lloydminster, AB, brother Jay (Joyce) Johnson of Raymond, AB, and numerous nieces and nephews. Trained in 1955 in Edmonton, as a lab and x-ray technician, she worked in Magrath, Hanna, and High River, eventually settling in Milk River. It was in Milk River that she met Gordon, and they married in September of 1964. In 1966 they welcomed their daughter, and in 1968 their son. They enjoyed many activities together, especially curling and golf. Jean very much enjoyed other sports, as well, including skiing in her younger years, fishing, and softball, of which she played, and also coached, for a number of years. She also loved to watch Major League baseball, curling, and The Olympics. Jean was very involved in her community throughout her life in Milk River, and she served, in her middle years, as Hospital Board Chairman. In later years, she and Gordon enjoyed their time as Snowbirds, wintering for 19 years in Yuma, Arizona, where they golfed, and had an active social life. Jean especially enjoyed golfing, and loved her annual golf trip with close friends. Family was also very important to her, and the lights of her life were her three grandsons, the first coming along in 2001. She doted on them, was very proud of them, and loved them deeply. She also had many amazing and dedicated friends, whose company she greatly enjoyed, and whom she also loved dearly as family. Thanks to the staff of Chinook Regional Hospital, and especially the staff at Milk River Hospital, many of whom Jean worked with many years ago, for their kind and compassionate care in her final months and weeks. A Graveside Service will be held at 2:00 PM on Friday, October 24, 2014 at the MILK RIVER CEMETERY, Milk River, AB. Luncheon to follow at the Agora Room, in the Milk River Civic Centre. In lieu of flowers, those who wish, may make memorial donations to the Canadian Diabetes Association, 204-2323-32 Ave. NE, Calgary, AB., T2E 6Z3. Send condolences at www.mbfunerals.com.

Leave a Condolence for Jaxon