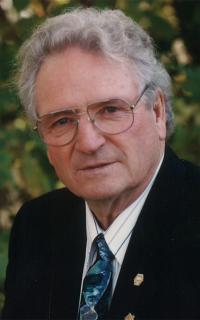 1930 ~ 2014
Mr. Walter Harold Arthur Stewart of Lethbridge, beloved husband of the late Mrs. Elizabeth Stewart, passed away at the Edith Cavell Care Centre on Friday, October 24, 2014 at the age of 83 years. Walter was born on October 29, 1930 at the family farm just north of Holland, Manitoba. He was the first of Myrtle (Harrison) and Harold Stewart’s four children. He attended school in Holland, Manitoba until WWII significantly affected his life. Due to a shortage of hired men, he followed his father, uncle and cousin driving commercial trucks after school and on weekends; well before he was of legal driving age. The shortage of workers caused by the overseas conflict encouraged Walter to discontinue his formal education in 1942, prior to finishing grade 6. By the age of 13, he was driving trucks full time until 1948, when he moved with his family to Lethbridge. Walter obtained his journeyman carpentry ticket when the trades were first certified in the 1950’s. In the early 50’s Walter was introduced to the Elks Club. Where he served in various chairs, including the Exalted Ruler, this led to him serving on both the Provincial and National Councils for the Elks. One of his proudest contributions to his community, was when he served for two consecutive terms on the Lethbridge Police Commission, especially as chairman. Walter was a founding member of the Alberta Home Builders Association, as well as the original Alberta New Home Warranty Program. His company Nu-Mode Homes was the first Alberta firm to join this new certification program. Walter was the first recipient of Alberta’s Distinguished Home Builders Award. Walter was a visionary, trend setter, full of zest and enthusiasm AND HE ALWAYS DID IT HIS WAY WITH THE GREATEST OF HONESTY AND INTEGRITY. In 1957, Walter Stewart Contracting Lethbridge Ltd. was started which morphed into Nu-Mode Homes, with his wife Beth, in 1964 and subsequently Walter Stewart Realty Ltd. He was one of the first to use prefabricated roof trusses, and walls, pre-finished kitchen cabinets as well as metal siding in Lethbridge and surrounding areas. He was instrumental in getting approved mortgages for semi detached housing in Alberta. His \”Zero Lot Line\” concept was one of the most successful building innovations in the City of Lethbridge. In 1975, Walter was treasurer for Alberta Council of HUDAC and over the next three years he served in various offices to become chairman in 1978. In 1990 Walter built \”Children’s House\”, a daycare, for the Children’s House Child Care Society and with help from various other like-minded individuals constructed child orientated features in this building, and for a number of years following he continued to drop in and visit the facility. He built numerous stand-alone homes and subdivisions in the City of Lethbridge and surrounding areas, these included St. Edwards Village, St. James Place, and most recent West Highlands. One of Walter’s most visible contributions and greatest legacies to the citizens of Lethbridge, in his mind, is the West Highlands Park located on the west side of Lethbridge. Walter was pre-deceased by his parents Harold and Myrtle Stewart, his second wife Elizabeth (Beth) Stewart, daughter Cynthia, grand-daughter Lori Baksa, great-grandson Brendan Berg, sister and brother-in-law Helen & Peter Doubinin. He is survived by brother Carly (Barbara) Stewart, sister Doreen (Ken) Heaton, son Clint (Jill) Stewart, daughters Cory (Randy) Baksa, Cris (Ferron) Kenmore, God-daughter Tamara (Trent) Weninger, granddaughters Terra (Norm) Berg, Shannon (Cam) Drake, Toni (Warren) Henke, Miranda (Johnathon) Penner, grandson Tyrel (Emerald) Kenmore, 11 great- grandchildren with one on the way, and one great-great grandchild, nieces and nephews, a stepdaughter Bernice (Bunny) Popoff and step – son Jim (Liz) Pratt. A Memorial Service will be held at 3:30 PM on Wednesday, October 29, 2014 at MARTIN BROTHERS RIVERVIEW CHAPEL, 610-4 St. S., Lethbridge, AB. In lieu of flowers, donations may be made to: Edith Cavell Centre Care, 1255 5 Avenue S., Lethbridge, AB, T1H 0V6; Alzheimer’s Society of Lethbridge, #402 740 4 Ave. S., Lethbridge, AB, T1J 0N9; Chinook Regional Hospital, 960 19 St S., Lethbridge, AB T1J 1W5, or the charity of your choice. Send condolences at www.mbfunerals.com.