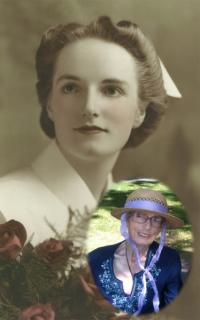 1917 ~ 2014
Our beloved Mother passed away peacefully in her sleep in her home at Fairmont Extended Care, on November 6, 2014 at the age of 97 years. Ethel was born in Long Beach, California where her mother had gone to escape the prairie winter. Her childhood was spent on the farm in Killam, Alberta where she developed her love for horses. The death of Ethel’s mother Annie played a significant role in her decision to pursue a career in nursing. She graduated from the Royal Alex Program, then went to the University of Toronto to specialize in public health. Ethel’s first position was as the first District Health Nurse in Bow Island, and it was there she met her husband Phil. After raising six children, she returned to her nursing career, first working at the Campbell Clinic with Dr. Stewart & Dr. Stillwell, then to the Lethbridge Health Unit. Ethel completed her career as the health nurse for the regional hospital. She had fond memories of working with the nursing students. Ethel was a member of the Southminster 48 Group, a volunteer for meals on wheels, Royal Order of the Purple Member and a C.G.I.T leader. In her retirement years, she travelled extensively with her husband and had many hobbies, such as painting & knitting. Ethel was the matriarch of her family. We are blessed to have had her in out lives for so long. Her positive influence will continue throughout the lives of everyone she touched. The family would like to thank Dr. Leam and the staff for the excellent care she received at the Fairmont Extended Care. Ethel was predeceased by her husband Phil, her son Keith, and her daughter Kathy. She is survived by her daughters Anne (Michael), Pat (Jack), Diane (Steven) and her son Doug (Chris) and son-in-law Darryl, as well as numerous Grandchildren and Great-Grandchildren. A Graveside Service will be held at 2:00PM on Monday, November 10, 2014 at MOUNTAIN VIEW CEMETERY, Lethbridge, AB. In lieu of flowers, those who wish may make memorial donations to a charity of your choice. Send condolences at www.mbfunerals.com.