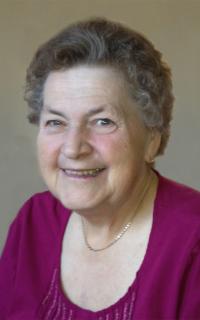 1941 ~ 2014
Safe in the arms of Jesus, GERT (SCHIEBOUT) BOLINK, beloved wife of Bert Bolink, formerly of Nobleford, AB, went home to her Lord and Saviour. Born December 8, 1941, she passed away at the Edith Cavell Care Centre on Tuesday, November 11, 2014, at the age of 72 years. Gert is survived by her husband Bert; children Brenda & Erik Vreeken, Nadine & Kris, Keenan, Katie Indenbosch, Kyle & Jessie Vreeken, Jason Vreeken; Gary & Evelyn, Sarah, John & Tahlia and Liam, and Justin Bolink; Sharon Bolink; Chris & Kathleen, Kayla, and Kelsey Bolink; brother Piet & Joan Schiebout; sister Elsie Dykman; brother-in-law Andy & Fanny Feenstra; numerous nieces, nephews, cousins, friends, and Gert’s Uncle Maarten & Aunt Adeline Warmink. Gert was born to Christiaan T. Schiebout and Alberta J. Warmink of Kipp, AB. She attended Rolling Hills and Coalhurst Schools, where she was a friend to many and the captain of the basketball team. Gert married Bert on June 9, 1961, in the Monarch Reformed Church. They made their home and life together in the Nobleford area, farming for many years before retiring to Nobleford. Well known for her gifts of hospitality and creativity, Gert’s hands were always busy serving others with love. Friends & family are invited to pay their final respects between 7:00 — 8:00 p.m., on Friday, November 14, 2014, at MARTIN BROTHERS RIVERVIEW CHAPEL (Waterton Suite), 610-4 St. S., Lethbridge, AB. Everyone is welcome to attend the Graveside Service at 1:00 p.m. on Saturday, November 15, 2014, at the NOBLEFORD — MONARCH CEMETERY. A Memorial Service will be held at 2:00 p.m., on Saturday, November 15, 2014, at the NOBLEFORD CHRISTIAN REFORMED CHURCH, 522 Highway Ave., Nobleford, AB. Childcare will be provided during the service. In lieu of flowers, those who wish may make memorial donations to the charity of your choice. Send condolences at www.mbfunerals.com