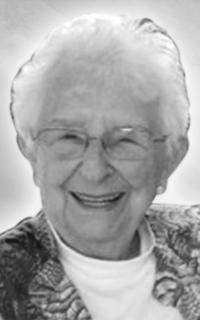 September 20, 1924 — Fort MacLeod, AB
November 6, 2014 — Calgary, AB
It is with profound sadness that the family of Margaret Catherine Wigelsworth announce her passing on Thursday, November 6, 2014 at the Sarcee Hospice in Calgary, Alberta. Mother was devoted to family and friends and she was keenly interested in hearing the details of our life experiences. She loved meeting people and extended her friendship to all. Her thoughtful nature, spunky personality and varied interests enabled her to cultivate a large circle of friends that she valued deeply. Margaret is survived by her children David Rylands, Pat Warren (Ken) and Doug Rylands; grandsons Warren Rylands (Christina), Michael Warren (Meredith) and Matthew Warren (Stacey); brothers John Hamilton and Hugh Hamilton (Loreen) and their families. She is also survived by Alan’s children Don Wigelsworth (Angela) and Laura Schmidt (Fred); grandchildren Alana (Dan), Jaydon (Kellie), Chelsea (Dwight), Paula (Nick), Michael (Shelley) and Emily (Troy). Margaret was predeceased by husbands Don Rylands and Alan Wigelsworth; brothers Bob, Gordon, Earl, Joe, Roy and Wilson; sisters Nadine and Madlyn and grandson Allen Schmidt. Margaret is also survived by many dear cousins, nephews and nieces. The family would like to express their gratitude to the staff and nurses of the Foothills Hospital Unit 32 as well as the Sarcee Hospice for their great care and compassion. Messages of Condolence may be forwarded through www.mcinnisandholloway.com. A Celebration of life will be held at a later date. In living memory of Margaret Wigelsworth, a tree will be planted at Fish Creek Provincial Park by McINNIS & HOLLOWAY FUNERAL HOMES, Park Memorial, 5008 ELBOW DRIVE S.W. Calgary, AB, T2S 2L5, Telephone: 1-800-661-1599