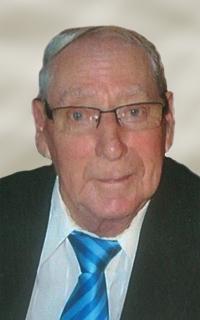 ALFRED "AL" GRAINGER, beloved husband of Monica Grainger of Lethbridge, passed away on Monday, November 17th, 2014 at the age of 83 years. Al was born and raised in Canmore and moved to Calgary in 1945. He and Monica were married in 1953 and celebrate sixty one years together this month. Over the years, Al was employed by Westinghouse, Texaco Exploration and Home Oil. He enjoyed living at Hidden Valley Golf Resort at Siksika from 1984-2013. He spent the summers golfing with his family, friends and coaching his grandchildren. In his retirement he and Monica wintered in Ajo, AZ until 2002. Then they relocated to the Crowsnest Pass and then Lethbridge. Al\’s children learned the theme song for CBC\’s \”As It Happens\” because Dad was the dedicated family chauffeur for many evening music lessons, sporting events, and other activities. Summers at Siksika were a rite of passage for Al\’s grandkids as they were woven into the Grainger fabric where they learned to have fun and appreciate family. Al was a lifetime member of the Knights of Columbus Council 1186. He had many hobbies including Bridge, stained glass, golf and curling. As well, he enjoyed watching the Flames and Stampeders. Dad was dearly loved by his wife Monica, children Louise (Larry McMahon) of Taber, Margot (Craig Chantler) of Calgary, Susan (Vern Boldick) of Duchess, John (of Saskatoon), and Jane (Paul Crawford) of Calgary, twelve grandchildren and four great-grandchildren, his brother Gord (Dorothy) of Summerland BC, sisters Eunice Hall of Brooks and June (Henry) Reid of Calgary. He was predeceased by his sister Winnie Stirling and his brothers Robert and David and his daughter-in-law Lenna Grainger. Prayers will be held at CORNERSTONE FUNERAL HOME, 2800 — Mayor Magrath Drive South on Thursday, Nov. 20th at 7 P.M. The Funeral Mass will be held at OUR LADY OF THE ASSUMPTION CATHOLIC CHURCH, 2405 — 12th Avenue South, Lethbridge on Friday, Nov. 21st at 11 A.M., with Father Kevin Tumback as Celebrant. Interment will follow in Mountain View Cemetery. In lieu of flowers donations may be sent to Habitat for Humanity 403, 477 — Mount Pleasant Road, Toronto, ONT., M4S 2L9, Doctors without Borders 402, 720 — Spadina Ave., Toronto, Ont. M5S 2T9, or the Lung Association, Alberta & NWT, P.O. Box 4500 Station South, Edmonton, Alberta T6E 6K2.