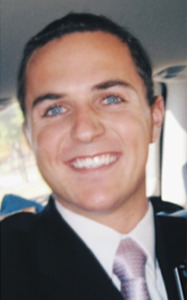 It is with great sadness that we announce the sudden passing of JEFFERY ALLAN WAYNE RIPLEY on November 11, 2014 at the young age of 26 near Kitimat, B.C. Jeff was born on October 8, 1988 in Magrath, AB. He grew up in Magrath and graduated from Magrath High School in 2007. After graduation, he served a 2 year mission for The Church of Jesus Christ of Latter-day Saints in St. Louis, Missouri. Upon returning from his mission, he attended the U of L where he completed a Bachelors of Neuroscience. Jeff began dating Dakota Passey in the summer of 2013. They were married later that year on November 8th, 2013. Jeff had a great love for sports, hunting, teasing his nieces and nephews, the great people of St. Louis, Missouri and his family and friends. You couldn’t help but love Jeff for his sense of humour, tender heart, his way of making friends with anyone and most of all his beautiful blue eyes. Jeff leaves behind his wife Dakota; Parents, Randy & Kathy; Siblings, Jason (Angie) their children Halle, Rushton & Bronson; Janice Ripley; Jenae (Josh) Johnson their children Kyson & Meysa; Jenna (Jeff) Heggie their children Peyton & Karly; In-Laws, Derrick & Becky Jo Passey & their children Cheyenne, Sierra, Mesa, and Decker; Grandparents, Joan Christianson, Bruce & Brenda Woodbury. Predeceased by Grandparents Wayne & Gerri Ripley; Aunt Gina Herbst. Jeff will be missed by so many. Until we meet again. Friends may meet the family at the Magrath Stake Center on Friday, November 21st, 2014, from 7:00 and 8:00 p.m. or at the Church from 10:00 to 10:45 a.m. prior to the Service. The Funeral Service will be held at The Church of Jesus Christ of Latter-day Saints, MAGRATH STAKE CENTER at 11:00 a.m. on Saturday, November 22nd, with Bishop Ryan Anderson officiating. Interment will follow at the Magrath Cemetery. E-mail your condolences to: legacycardston@gmail.com