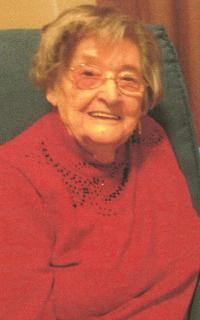 1928 ~ 2014
Mrs. Eva Blanche Watmough (Usciski) of Lethbridge passed away peacefully on November 22, 2014 at the age of 86 years. Eva was born July 16, 1928 in a farm house not far from where she would grow up, outside of Rocky Mountain House. She was the youngest of 5 children of William and Verda Payne. Eva went to a one-room school house until she was 16. After her mother’s, passing she went to work in Rocky Mountain House where she met Stan Usciski and married in 1946. They moved to Barrhead where they had 3 children. They then moved to Edmonton for 3 years, and on to the Crowsnest Pass. Once the children had left home, Eva and Stan moved around eventually settling in Lundbreck where Eva joined the Livingstone Ladies Club and enjoyed her crafting and socializing. After Stan passed away in 1990, Eva moved around Southern Alberta for a few years, married Albert Watmough, and eventually moving to Lethbridge where he passed. Eva stayed in Lethbridge, living in Legion Arms, Blue Sky Lodge, and then St. Therese Villa. She spent her last few years enjoying the company of her family and friends. She will be sadly missed by all who knew her heart and her sense of humor. Eva leaves behind to mourn her 2 daughters Shirley (Ray, deceased) Scotton of Cowley, AB, Donna (John) Wick of Lethbridge, AB; her son Doug (Ann) Usciski of Innisfail, AB; grandchildren Tracy Brown, Jason Scotton, Angela Leonard, Lynn Usciski, Jennifer Scott, Benny Usciski, Amanda, Dustin Usciski & Tammy Jack; as well as her brother Bill Payne. Besides her loving husband Eva was predeceased by parents William & Verda as well as siblings Meta Erikson, Alfred Payne, Elda McCarther & Andy Jensen. A Funeral service will be held at 2:00pm on Friday, November 28, 2014 at MARTIN BROTHERS RIVERVIEW CHAPEL, 610-4 Street South, Lethbridge, AB. Those who wish, memorial donations may be made to The Lung Association of Alberta, P.O. Box 4700 STN. S, Edmonton, Alberta T6E 9Z9. Send condolences at www.mbfunerals.com.

One Condolence for “WATMOUGH Eva”