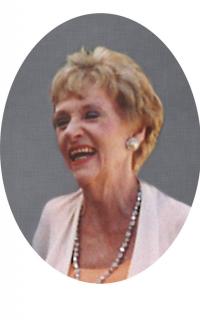 CHRISTINE ELEANOR CRAWFORD FENTON (nee WHITE), beloved wife of Matthew Robert Fenton \”Bob\” of Lethbridge, passed away at the St. Theresa Villa, on Saturday, December 6th, 2014 at the age of 79 years. Eleanor is survived by her children; Gavin Fenton (Mary Jo) of Edmonton, Holly Fenton-Klima (Brian) of St. Albert, Melonie Jackson (Gary) of Lethbridge and Tara Groves (Don) of Lethbridge, sister Betty MacGregor (Bob) of Mississagua, ON and brother Doug Davis of Baysville, ON, nine grandchildren, four great-grandchildren as well as numerous nieces and nephews, Reilly (Tiffany), Donovan (Erin), Caley (Cathal), Kyle (Lindsay), Ainsley, McGwire, Quinn, Gavin and Ella, Harper, Phinn, Wallace and Stephen. Eleanor was predeceased by her infant son Robert Scott, father James White, mother Bertha May (Dot) White, brother Russel White and sister-in-law Ann Davis. Eleanor was born and raised in Fernie, B.C. September 27th, 1935. She graduated from the Fernie High School and moved on to attend Henderson Business School in Calgary Alberta. She was a member of the Canadian Girls in Training (CGIT), as a volunteer for numerous years while in Calgary. She then worked in the insurance business until she married the love of her life \”Robbie\” on May 26th 1956 and they had 58 wonderful happy years together. The family moved to Lethbridge in 1962 where she resided until her passing. Eleanor and Robbie raised four loving children who were the focus of her life and gave her great pride and joy. This same love and joy extended to her grandchildren and great grandchildren. In her later years she enjoyed a part-time career in sales, and volunteer work with Lethbridge Musical Theatre as costume mistress for over 30 years. Eleanor was an avid sports person and pursued various sports including Basketball, Skiing, Skating, Racquetball, Bowling, Swimming, Golf and Tennis. She spent countless hours watching and traveling with her older children to swimming events, and then hours driving, watching and travelling with her youngest child to dance competitions and events. What Eleanor enjoyed most in life was her time with her family at the \”Cabin\” at Rosen Lake for over 70 years and traveling with her husband to Ireland to visit family there. The most amazing thing about Eleanor was her ability to connect and make friends with people no matter the situation, even in her last years at St. Therese\’s. Eleanor will be missed and remembered by all who loved her and knew her. A special thanks to the staff and St. Therese\’s for the kind and loving care she received, especially the caregivers in 1 west. A Memorial Service will be held at CORNERSTONE FUNERAL HOME – 2800 Mayor Magrath Drive South, Lethbridge, Alberta on Thursday, December 11, 2014 at 11:00 A.M. with Rev. Terry Shillington Officiating.