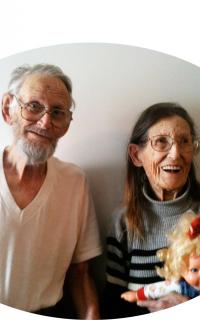 Len Elder, grieving his loving, devoted wife Dorothy (Dot) Lilian (Nov. 21, 1917- November 16, 2014), died peacefully in hospital in Lethbridge. The second of four sons of Edward James and Teresa Elder, Len is predeceased by his older brother James Edward, wife Nora and nephew Ted Elder and leaves to mourn, Dot’s sister Patricia (Ralph) Barnes, his brothers Alexander (Marion) of Lethbridge and William (Marie) of Calgary along with several nieces and nephews. At age 17 Len joined the RCAF and after the war in 1947, married Dorothy (nee Hatson). Len dedicated himself to his wife’s care in his last years. Together they were passionate volunteers for the CNIB, Len creating "talking" dogs for blind children, Dot audio recording textbooks for blind students. They were avid collectors, and had a career with AGT including memberships with the Telephone Pioneers of America. Although resident in Alberta their whole lives, they annually travelled for many years to Mesa, AZ before retiring their motorhome. Thank-you to faithful friend Maxine and all workers at West Highlands and the Lethbridge Regional Hospital. Your caring attention and dedicated service for both Len and Dot in these last (rather challenging) years are greatly appreciated. Dot and Len will be scattered together at Mountain View Cemetery, no formal funeral service will be held. Donations can be made to the CNIB, 410 Stafford Drive South, Lethbridge, AB, T1J 2L2.