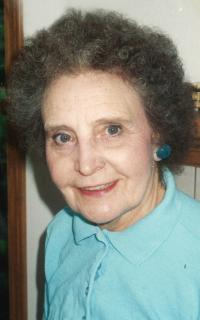 1912 ~ 2014
Mrs. Hazel McKenzie was born in Red Deer Alberta, September 23, 1912 and passed away in Lethbridge Alberta December 10, 2014 at the age of 102 years. Hazel spent the majority of her life in Lethbridge. She attended school in Lethbridge and upon graduation attended normal school in Calgary. As a practicing teacher, she also took courses at the University of Alberta. She taught for 19 years. Before her marriage in 1941 she taught in the area around Lethbridge, beginning her career at Sundial school. During the 2nd World War she was active in CATS (Women’s Volunteer Corps). She kept up her interest in education substitute teaching while married. Following the death of her husband Ralph in 1963, she taught full-time until the mid 1970’s. Hazel was an active learner throughout her life, belonging to the Lethbridge Mathesis Club in which members researched and presented papers on areas such as the Arts, History, Literature and foreign travel. When asked, Hazel said her interests were \”reading, sewing, gardening, travelling and raising her family.\” She shared her love of gardening with her son Alex and together they invited people throughout Lethbridge to view their beautiful garden. Hazel was lifelong member of Southminster United church. Hazel is survived by her son Ross (Kathy) and her daughter Heather (Craig) Montgomerie; Her grandsons Brad McKenzie and Brian McKenzie and granddaughter Lindsay (Andrew) Montgomerie-Whalen. Her great grandchildren Cody, Emma Catherine and Christopher McKenzie, Ronan Montgomerie-Whalen and Brianne and Elyssia McKenzie. Hazel was predeceased by her husband, Ralph Baynton McKenzie, her parents John Tait and Mary Agnes (Smith) Watson, her sisters, Leola Watson, Mona Donaldson and Phyllis White, and her son Alex. The family wishes to extend thanks to the staff at Fairmont Park Extendicare for the wonderful and loving care and \”home\” environment offered during Hazel’s final years. A Memorial Service will be held at 10:00am on Monday, December 15, 2014 at BUCHANAN CHAPEL OF SOUTHMINSTER UNITED CHURCH, 1011-4 Ave. S., Lethbridge, AB T1J 0P7, with Reverend Ruth Preston — Schilk, officiating. In lieu of flowers, please make a contribution to a Lethbridge charity of choice in Hazel’s name.Send condolences at www.mbfunerals.com