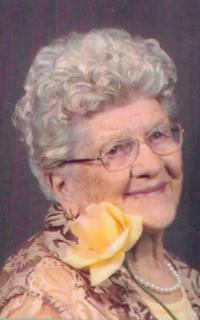 1912-2014
Our amazing Grace passed away on December 11 after 102 years of adventurous life. We will miss her sense of humour, welcoming smile and hospitality. Her greatest pleasures were large family gatherings, happy hour, camping, travel and playing cards with friends. Grace was born near Marengo Saskatchewan on March 20, 1912. She grew up in Loverna and it was there that she met and married her loving husband Mac. They were blessed with three children. Grace loved to dance and she and Mac attended country dances almost every weekend. They also belonged to a drama club and starred in local plays in New Brigden. In 1964 Grace and Mac moved to Foremost, Alberta and became the owners of the Foremost Hotel. Foremost was their home for the next 21 years. They spent their retirement years in Fort Macleod, Alberta, from 1985 until Mac’s passing in 1997. In 1998 Grace moved to Lethbridge. There she remained until her final year, which she spent at Lee Crest in Cardston. Grace was predeceased by Mac, their son Douglas, infant great-granddaughter Jennifer, and 7 siblings. Grace is survived by her daughters Jean Day and Maxine (Garnet) Cawthra; 11 grandchildren; 27 great-grand children, 5 great-great-grandchildren and numerous nieces and nephews. A Memorial Service will be held at CHRISTENSEN SALMON GENERATIONS FUNERAL HOME, 703-13 Street North, Lethbridge, on Wednesday December 17 at 2:00 p.m. In lieu of flowers a donation may be made to the Alzheimer’s Society or the charity of your choice. The family extends a special thank you to the staff at Lee Crest, Cottage 2, for their exceptional loving care.

One Condolence for “KENNEDY Grace”