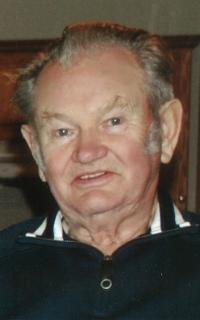 1923 ~ 2014
\”Commit your way to the Lord. Trust in Him and He will act.\” – Psalm 37:5. On December 24th Willy passed into the arms of his Saviour with his wife Elsie at his side. We will remember him for his deep love of family, his love of his adopted land, Canada, especially the beauties of Alberta, his amazing talent for fixing all things mechanical and his great enthusiasm for fishing. Willy was born on March 17, 1923 in Wiesengrund, Germany, to Wilhelm and Maria Duda. He was the eldest of eight children, Emanuel, Paul, Elisabeth, Gertrude, twins Adolf and Emma, and Guenter, who all predeceased him. From 1929-1937 he attended school and then took 3 years of apprenticeship to become a machinist. On April 15, 1942 he joined the Luftwaffe. In 1945 he was captured by English troops and stayed in a prison camp until January 1946. He then went to the East Zone where he married Agathe Koslowsky. In 1948, together with Agathe, her mother and their two sons, they escaped from the east with the help of MCC Canada and went to Camp Gronau in West Germany. There he worked for the MCC repairing cars and chauffeuring MCC workers. In September 1950 the family emigrated to Coaldale, Alberta where they attended the Mennonite Brethren Church. Life wasn’t always easy, but with God’s help their remaining three sons were born and Willy supported the family by working at Harry’s Auto with the mechanic’s licence he obtained in Calgary. In addition, he built three houses and still found time to take his family water skiing, fishing and camping. Willy retired in 1985 to care for his wife Agathe who predeceased him in October, 1986. In fall of 1990 Willy met Elsie Wieler and they married on September 5, 1992. For 22 wonderful years they enjoyed travelling, working in the garden and visiting with children, grandchildren and great-grandchildren in Coaldale, Manitoba and New Jersey. Willy was predeceased by his son Guenter (Kathi). He is survived by his sons Hans (Jean), Walter (Karen), George (Kathy), and Ron as well as 13 grandchildren, 23 great-grandchildren and 4 great-great grandchildren. He was stepfather to Elenore (Roland), Hannah (David) and Rick as well as 4 step-grandchildren and 3 great-grandchildren. A Funeral Service will be held at 2:00pm on Friday, January 2, 2014 at COALDALE MENNONITE CHURCH, 2316-17 St., Coaldale, AB, with Pastor Lillian Thompson & Pastor George Klassen, officiating. The family would like to thank the staff at Coaldale Hospital as well as all the family and friends (especially Linda) that were such constant visitors and support during Willy’s illness. In lieu of flowers, donations can be made to the Mennonite Central Committee (MCC Alberta, 210, 2946 – 32 St. NE Calgary, AB, T1Y 6J7). Send condolences at www.mbfunerals.com.