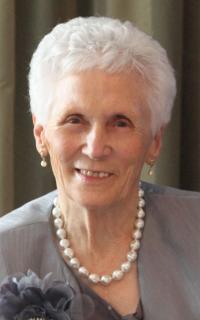 JANUARY 10, 1928 — DECEMBER 21, 2014
\”Surely goodness and love will follow me all the days of my life, and I will dwell in the house of the Lord forever.\” -Psalm 23:6. Mary Klassen, dearly beloved wife of the late Jacob J. (Jake) Klassen, peacefully went to be with her Lord on Sunday December 21, 2014, at the age of 86 years. Mary (born Maria Krahn), the oldest of six children, was born in Neuendorf, Ukraine. She was baptized in 1943 and later that year began a long journey with her mother, siblings, aunts and cousins, arriving in Soest, Westfalen in 1945, where they stayed until they were allowed to immigrate to Canada. Mary and her immediate family arrived by the ship, Beaverbrae, in Quebec and took the train to Coaldale, Alberta, arriving in June 1948. Mary married her sweetheart, Jake, on September 17, 1950. Mary enjoyed her role as a nurturing mother and devoted wife. She helped Jake run his business, Klassen Construction Alta Ltd. Mary had the gift of hospitality and enjoyed preparing family dinners and always welcomed friends into their home. She was an active member of the Coaldale Mennonite Church and for many years, the Sunbeam Sewing Circle. Her interests included gardening, sewing, golfing and baking. In her later years she devoted much of her time and energy as a prayerful grandmother encouraging her family on their Christian path. Our dear, sweet mother, grandmother/Oma blessed us all with her kindness, graciousness and wisdom. Everyone who came to visit her in her home was offered some of her wonderful baking or cooking (zweibach, cookies, borscht). Mary is survived by her children — Alfred (Patrice) Klassen of Sherwood Park, Irene (Harry) Penner of Lethbridge, Norma (Don) Friesen of Burlington, ON; Grandchildren — Brent (Elisa) Klassen, Andrea (Brad and great-grandchildren Caleb, & Graham) Buechler, Bryan (Vanessa and great-grandchildren Genevieve and Henrik) Klassen, Alyssa (Adan) Zavala, and Olivia Klassen, Joel and Jeff Penner, Stephen (Janelle) Penner, Jessica (Kiley and great-grandchildren Kaden and Reise) Podhordeski, Adrien and Annika Friesen; brothers, Jake (Rita) Krahn, Henry (Trudy) Krahn, and sister Anne (Ferdi) Peters; brother in-law Gerald (fiancée Ralyn) Klassen; sisters in-law Nettie (Willie) Hildebrandt, Lydia (Jake) Retzlaff, Amelia (John) Dyck, Heidi (John) Retzlaff, Sara (Dave) Derksen, Kate (Dennis) Harder, Elizabeth, Susan and Hilda Klassen; and numerous dear cousins, nephews and nieces and all their children. Mary is predeceased by her parents David and Maria Krahn; her husband, Jake; brother David Krahn and baby sister Lena Krahn; parents-in-law Jacob and Aganeta Klassen; brothers-in-law David, Daniel and Henry Klassen; sister-in-law Linda Klassen; and nephew James Harder. We will dearly miss being together with our mom, grandmother/Oma but she will live in our hearts forever. Family and friends are invited to visit and share their memories at the viewing, Monday, December 29, 7 — 8pm at MARTIN BROTHERS RIVERVIEW CHAPEL, 610 — 4 Street S., Lethbridge. Interment will be at the COALDALE CEMETERY on Tuesday, December 30 at 1:00pm for family and friends. Everyone is warmly invited to a Celebration of Life at 2:00pm at the COALDALE MENNONITE CHURCH, 2316 — 17 Street, Coaldale, with Pastors Lillian Thompson and Werner Janzen officiating. If desired, memorial tributes may be made in Mary Klassen’s memory to MCC Alberta, 210, 2946 — 32 St. NE Calgary, AB T1Y 6J7; the Chinook Regional Hospital (Heart Function Clinic), 960 — 19 Street S., Lethbridge, AB T1J 1W5; or St. Michael’s Health Centre (Palliative Care), 1400 — 9 Avenue S., Lethbridge, AB, T1J 4V5. Send condolences at www.mbfunerals.com.