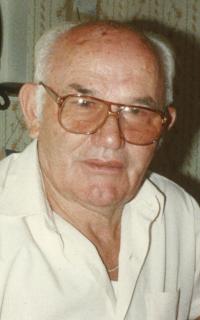 1916 ~ 2014
Mr. Daniel Supranow of Lethbridge, beloved husband of Mrs. Sophie Supranow, passed away peacefully at the Chinook Regional Hospital on December 26, 2014 at the age of 98 years. Daniel was born on October 10, 1916 in Gluszyce, Poland. Son of Michal Supranow and Elzbieta Miziurko. He immigrated to Canada in 1950 where he worked as a sugar beet labourer and later was employed by Safeway for 28 years. He enjoyed camping with his family in Waterton, Radium and Banff. Besides his loving wife Sophie, Daniel is survived by his daughter Renate Walser; four grandchildren Susan Walser, Robert, Michael & David Walser; Great grandchildren Jasmine, Ryan, Richard Vanderwal, Adam, Christopher Vanderwal, Matthew, Sarah, Pamela, Mitch, Taylor and McKenzie; Great-great grandchildren Treyton, Linnea, Zachary and their families. A Memorial Service will be held at 11:00 am on Friday, January 2, 2015 at MARTIN BROTHERS RIVERVIEW CHAPEL, 610-4 St. S., Lethbridge, AB with Deacon Ray Wagner, officiating. Interment will follow in Archmount Cemetery. Send condolences at www.mbfunerals.com.