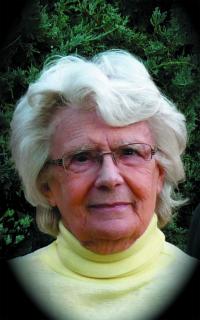 FEB 7, 1928 ~ DEC 17, 2014
Born in Staffordshire, England, Lilly Doreen Chamberlain was the youngest child of seven. She grew up in Wordsley during the lean years of the 1930s and wartime, when she learned a lifelong lesson of ‘waste not, want not’. She earned a scholarship position at Dudley Girls High School. In 1949, Doreen married Donald Wilkie. Six years later, Doreen and daughters Susan and Julia immigrated to Canada to join Don. Doreen adjusted to life in a small hamlet in the Ontario bush. While there they welcomed a third daughter, Valerie. Shortly after, Don accepted a teaching position and the family moved to Nobleford, AB and later to Milk River, AB. In June 1967 she was suddenly widowed. With her usual pluckiness, she chose to stay in Canada and raise her daughters by herself. That fall, she enrolled in the Bachelor of Education program at The University of Lethbridge. She taught in Coaldale and then at The Lethbridge Community College where she tried to instill a love of the English language in all her students. Doreen loved a good book, a lively conversation, yard sales, silk blouses, harvesting her grapes and apples, making jams and, above all, she loved animals. Doreen could always be found with a dog at her side or a cat in her lap. She had a special affinity for birds. For many years she raised exotic birds and helped many wild birds get back to health. She became, essentially, a ‘bird whisperer’. She engendered in her family a love of all creatures. Thus it was no surprise when she established Pet Parade in 1978 with her daughters. This business exists 37 years on. Doreen is survived by Susan (Dave) Wilkie, Julia Wilkie, and Valerie (Dan) Sullivan and grand-daughters Nicole (Chris) Brookfield, Sara Gobeil and Kendra Sullivan. Doreen was loyal to us all. As a mother, she taught honesty, fairness, and generosity; and if you were her friend, it was for the long run. Flowers are gratefully declined and we ask that, if you wish; make a donation to animal rescue or wildlife preservation. A Memorial Service will be held at 2:00pm on Saturday, January 3, 2015 at MARTIN BROTHERS RIVERVIEW CHAPEL, 610-4 St. S., Lethbridge, AB, with Canon Allan McQuaig, officiating. Send condolences at www.mbfunerals.com