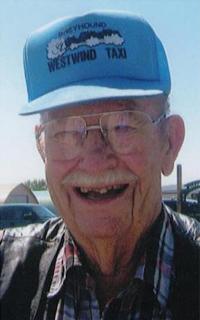 Feb 1, 1921- Dec 30, 2014
Dad was born in Bellevue, Alberta and raised in Pincher Creek. Over the years he was a rancher, coalminer, police officer, business owner (Westwind Taxi), husband, son and grandfather. On April 10, 1943 he married Edna Mary Lewis. John is survived by two sons Barry (Sophie) Carney of Cowley and Dennis (Ann) Carney of Red Deer as well as 6 grandchildren, 7 great grandchildren and 1 great great grandchild. Dad was predeceased by Edna, his parents James and Mary (Petiot) Carney, Harold and Ivy (Goodwin) Lewis and a daughter-in-law Angela (Bruder) Carney. Since 2011, dad has resided at Vista Village under the care of the many special care givers and Lovi Scott and her extensive team with AHS. A memorial service will be held at 4:00 P.M. on Friday January 8, 2015 at the COWLEY COMMUNITY HALL, Cowley; Alberta. In lieu of flowers, donations may be made to the Vista Village Residence Fund, Box 1510, Pincher Creek, AB.