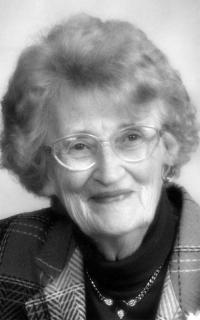 June 5, 1917 to December 29, 2014
Mary passed away peacefully on December 29, 2014 at Coaldale, Alberta at the age of 97 years. Mary was born on the family homestead near Cluny, Alberta, the only child of Irene and Hubert Tabor. In 1939 she attended the Calgary Normal School and obtained her teaching certificate. After teaching several years she married Neal Dumka in 1944. As an only child she often said she would like a big family. They resided in Lethbridge, Arrowwood and Milo area before moving to Vulcan in 1953 where she taught elementary school for many years. She was very active with ACW, Royal Purple, the Auxiliary Legion and Pioneer Acres. After retiring from teaching in 1979 she lived in Standard, Strathmore, Lethbridge, and Coaldale. She is survived by her 6 children: Carolyn (Dennis) Burke of Coaldale, Linda (Willard) Peterson of Kelowna, Don (Willa) Dumka of Calgary, Marilyn of Calgary, Bob (Barb) Dumka of Vulcan and Deb (Craig) Kushner of Calgary, 14 grandchildren and 18 great -grandchildren. She was predeceased by her parents Hubert and Irene Tabor of Vulcan, 2 grandchildren (Mark and Katherine), and by her husbands Neal Dumka, Sigfred Selgensen and George Risdon. Mary loved people and visiting with her family and friends gave her so much pleasure. She always said, \”expect the best from people and you will get it\” and she truly lived her life that way. We will miss her so. At Mary\’s request there will be no service — a family gathering will take place in the spring. In lieu of flowers donations may be made to the Coaldale Health Centre Long-Term Care in Mary\’s name. Arrangements in care of Vulcan Funeral Home. Telephone (403) 485-2633. E-mail condolences through www.vulcanfuneralhome.ca.