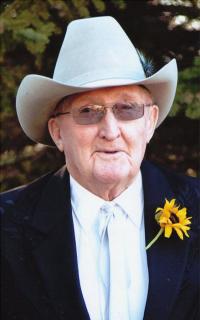 1923 — 2015
Emile Theodore Schauerte slipped away peacefully at the Pincher Creek Hospital to meet his Lord and his beloved Ruth. Emile will be lovingly remembered by his children Mary (Ken) Clinton, Sharon (Art) Bonertz, Pete (Rhonda) Schauerte, Diana Shortt and Donna Schauerte; 10 grandchildren and 22 great grandchildren; his brothers Joe (Jean), Otto "Happy", Paul "Hank", Lawrence (Joan) and Walter (Jane) and sister- in-law Mary (Bill) Everts. Emile was born to John and Clara Schauerte east of St. Henry’s Church on September 28, 1923. Emile learned his work ethic at a very young age running the farm. He was a man of many skills including mechanics, farming, projectionist, meat cutter, crafts person, truck driver and whatever it took to raise his family. His passions were riding horses, wood working crafts and dancing with Ruth. Emile was a lifetime member of the Knights of Columbus, Windy Slopes Health Foundation a member of St. Michael’s School Board from 1964 until 1967and working with Barry and Sophie Carney at the Cowley Lions Club. Dad was a gentle, caring and giving man and was always willing to come to the aide of anyone that needed help or assistance. Dad could always make everyone smile with his quick wit and colloquial saying with a twinkle in his eye. He enjoyed his homes no matter where they were including the last few years at Vista Village. We loved dad immensely and we miss him always. Relatives and Friends are invited to the Prayer Service to be held at St. Michael’s Catholic Church (958 Christie Avenue, Pincher Creek) on Thursday, January 15, 2015 at 7:00 P.M. Funeral Mass will be Celebrated at St. Michael’s Catholic Church on Friday, January 16, 2015 at 11:00 A.M., with Reverend Silvano Vargas presiding. Memorial Donations in Emile’s name may be made directly to the Windy Slopes Health Foundation Box 2554, Pincher Creek T0K 1W0.