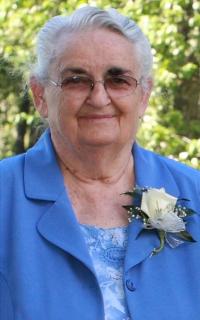 1928 ~ 2015
Mrs. Mary Jane Johnson of Lethbridge, (formerly of Aden), beloved wife of the late Mr. George Johnson, passed away peacefully at home on Saturday, January 17, 2015 at the age of 86 years. She was born on February 14, 1928 in Grass Range, Montana, moved to Spring Coulee where she took her education, and then moved to Milk River in 1945. While in Milk River, she met and later married George Johnson in 1948. In 1953 they moved to Aden, and there they had 6 children, Linda, Doug, Shirley, Bill, Jean and Tom. She has resided in Lethbridge for the past five years. Mary is survived by her children Linda (Berv) Pollard of Grand Prairie, Bill (Katie Ann) Johnson of Aden, Jean (Doug) McRae of Pincher Creek, Tom (Marilyn) Johnson of Aden, sisters Annabelle Johnson of Airdrie and Barbara Anderson of Lethbridge; son-in-law Roger (Patricia) Stennes of Iddesleigh, AB; 16 grandchildren; 21 great-grandchildren. She was predeceased by her beloved husband George; son Doug; daughter Shirley; grandchildren Cherry and Darrell Johnson and three brothers and a sister. Family and friends are invited to pay their respects between 7-9pm on Thursday, January 29, 2015 at MARTIN BROTHERS RIVERVIEW CHAPEL, 610-4 St. S.. Lethbridge, AB. A Funeral Service will be held at 2:00pm on Friday, January 30, 2015 at MARTIN BROTHERS RIVERVIEW CHAPEL, 610-4 St. S., Lethbridge, AB, with Lorne Moore, Heather Darley, Brady Anderson and Arnold Blonke, officiating. Interment will follow at Mountain View Cemetery, Lethbridge, AB. Send condolences at www.mbfunerals.com