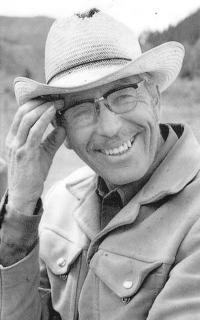 At the grand age of 96 Robert Yates Burles passed away on a warm and windy day, January 24, 2015, in Pincher Creek, Alberta. Bob was born on December 10, 1918, the sixth child of homesteaders Percy and Elizabeth Burles. He was the first of their nine children to be born in the hospital in Pincher Creek instead of at home. He was baptized in St. Martin’s Anglican Church, which was later moved to Heritage Park in Calgary. Bob grew up on Cabin Creek Ranch in the Porcupine Hills north of Cowley and attended the one-room Olin Creek School. A horse he was riding to school slipped on a frosty bridge and broke Bob’s foot. Shortly after his foot healed, it happened again: same horse, same bridge, same foot. Bob signed up for service in World War II, but the riding accidents left him unable to wear army boots. He stayed on Cabin Creek Ranch, a place he loved, taking over from his parents. In 1950 Bob married Mary-Jo Hutchinson, a teacher at Olin Creek School. As a wedding gift, his parents gave them the Mason & Risch family piano. He played by ear with a rolling style. He loved to dance. He also played guitar and he sang beautifully. Neighbours on the other side of the Oldman River could hear him singing Streets of Laredo, Down in the Valley and other classics on the tractor or on horseback. His youngest daughter Gillian inherited the Burles family piano. Bob and Mary-Jo raised six children–three girls and three boys. Mary-Jo said if the army had known about Bob’s ability to walk and walk and walk with a child on his shoulders they might have let him join with cowboy boots. Bob raised Hereford cattle on the family homestead and he expanded Cabin Creek Ranch with more land. He was secretary-treasurer of the North Fork Livestock Association for thirty-two years, ran cattle in the Gap and was part of the round up every fall. He was also a member of the Waldron Grazing Co-operative and served on the board as a director from 1982 — 88. Bob was a naturalist with a deep connection to Cabin Creek Ranch, nature and the landscape of the Porcupine Hills. It meant a lot to him that two of his sons, Mark & Warren, took over Cabin Creek Ranch, with Mark and his wife Monica raising their children on the ranch Bob loved. Bob observed and recorded weather data for the government for fifty years. He was a Charter member of the Cowley Lions Club and served as President for one term. He was also a deacon in St. Martin’s Anglican Church and sang in the choir. He was a rancher, a well-read one with an interest in archaeology, geology and history. After retirement he volunteered with the Oxfam Farmers’ Brigade in Nicaragua. His love of music took Bob to the opera in Calgary and to cowboy poetry gatherings to hear his oldest son play and sing. He visited his adult children in Nunavut, Germany and the NWT, packing furs, exploring castles on the Rhine and cruising Great Slave Lake, generally having fun. When someone commented the drive to Yellowknife was long, he said, \”Yes, but I’m good company, you know.\” Laughter was his trademark. He was very good company. Left to mourn the passing of a true gentleman are his children, Noel (Audrey) at Fort McMurray, AB, Jacquelyn (Ben) at Yellowknife, NT, Warren at Kugluktuk, NU, Mark (Monica) at Cowley, AB, Heather (Gerd) at Chilliwack, BC and Gillian (Brian) at Yellowknife, NT, numerous grandchildren and a few great-grandchildren, as well as neighbours and friends. He was predeceased by his wife Mary-Jo in 2009, an infant son Lyndon in 1963, and his sister and seven brothers. In retirement Bob volunteered at the Kootenai Brown Pioneer Village. In lieu of flowers, those who wish may donate to: Kootenai Brown Pioneer Village. P.O. Box 1226, Pincher Creek, AB. TOK 1W0. A Memorial Service will be held at 2:00 P.M., on Saturday, January 31, 2015 at ST. JOHN’S ANGLICAN CHURCH, St. John Avenue & Main Street, Pincher Creek, Alberta, with Sylvia Faoro, Officiating.