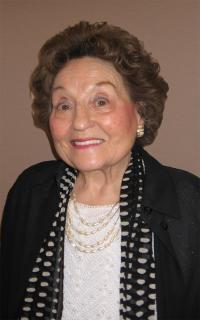 March 1, 1922 – December 30, 2014
Irene Clark was called home to the Lord December 30, 2014 after a wonderful 92 years. She passed away at the Chinook Regional Hospital in Lethbridge, Alberta after a short hospital stay. Irene is lovingly remembered by her son Ted Clark, daughter Colleen (Dave) Slovack, seven grandchildren and nine great grandchildren, with another on the way. Her grandchildren include Ryan (Abby) Slovack, Amy (Shawn) Hass, Mark (Ashley) Slovack, Julie Hoult, Jordan Hagg, Kimberly (Shawn) Smith and Kelsey Hagg. She was predeceased by her husband Telford Clark, her daughter Patricia Hagg, her parents John and Mary Lukacs and all ten of her siblings. Irene was born in Retlaw Alberta, raised on the Lukacs family homestead and had a love for music and singing. She married Telford, the love of her life, in 1942 and they were married for 57 years. She was a dedicated mother and ‘Grammy’. She filled all our lives with love and care and will be greatly missed. A celebration of Irene’s life will take at CORNERSTONE FUNERAL HOME – 2800 Mayor Magrath Drive South, Lethbridge, AB on Saturday January 3, 2015 at 1:00 P.M. with burial to follow at Mountain View Cemetery.