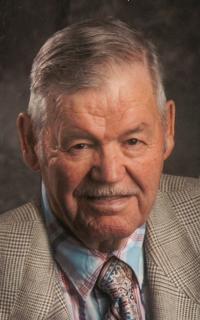 1921 ~ 2015
Mr. Stuart Dickout of Lethbridge, beloved husband to Mrs. Anne Dickout, passed away peacefully on January 26, 2015 at the age of 93 years. Stuart was born in Iron Springs, on the family farm on October 28, 1921. He worked on the family farm with his dad and drove grader for the county for many years. During this time he met Anne, the love of his life. They were married on July 2, 1953 in Picture Butte and started their lives together in Iron Springs. They moved to many different towns in Southern Alberta until settling in Enchant and purchased the Enchant General Store. He developed a love for Enchant over the years and was instrumental in developing the Enchant Park, the Museum, and was a member of the Historical Society. His faith was very important to him and was an active member of the Evangelical Free Church until the time of his passing. Besides his loving wife Anne, Stuart is survived by his 3 children, Randy; Joy Gillard and her sons Cole and Cody (Jackie); and Gloria (Norm) Elaschuk and their daughter Anndie; sisters-in-law Janet Dickout, Lorraine Kish, Veronica Forbes and Marilyn Kish; as well as numerous nieces, nephews, cousins and their families. Stuart was predeceased by his parents Morley and Florence (nee Brady) Dickout; parents-in-law Andrew and Emerencz Kish; brothers Elmer and Clarence; sister Audrey; brothers-in-law Bud Hadford, Andrew Kish, Murray Forbes, and John Kish; sister-in-law Bernice Dickout. A Funeral Service will be held at 2:00pm on Saturday, January 31, 2015 at the EVANGELICAL FREE CHURCH, 4717 — 24 Ave South, Lethbridge with Pastor Jeffery Frostad officiating. Interment in the Archmount Cemetery. Flowers are gratefully declined. Those who wish may make memorial donations to the Southern Alberta Bible Camp, PO Box 99 Lomond, AB T0L 1G0. Send condolences at www.mbfunerals.com