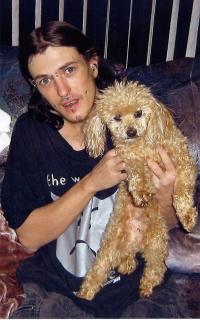 1976 ~ 2015
It is with great sadness that we announce the passing of JAY ALLAN STUART PARK, on Friday, January 30th, 2015 at the age of 38 years. Jay was born in Brooks, Alberta on December 3, 1976 to Judy and Byron and was raised in Lethbridge, Alberta. He was predeceased by his father Byron and his maternal grandparents, Marion and Harvey Kilfoyle. Jay will be sadly missed by his mother Judy, his stepfather Alan Hoard, his loving aunty Lee and Jay’s faithful companion Rayne. He is also survived by his stepbrothers and numerous aunts, uncles and cousins near and far. Jay was a gentle soul who loved watching sports, camping, going to movies with friends, attending concerts and spending time with his family and friends. A gathering to honor Jay, for all his family and friends, will be held on Saturday, February 7, 2015 at the Northside Luigi\’s Restaurant from 4:00 – 8:00 P.M. In lieu of flowers, please donate to the charity of your choice in his honour.