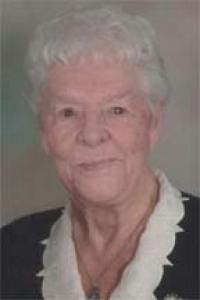 February 23, 1927 – February 4, 2015
DELILA JACKSON FOX formerly of Hill Spring, Alberta, beloved wife of the late Douglas P. Fox, passed away peacefully at Raymond, Alberta at the age of 87. She is survived by her children James (Brenda), Douglas (Vivian), Gwendolyn (Wayne) Merrill, Kathrine (Robert-deceased) Darker, Calvin (Trish), Sandra (Kim) Jones, and Susan (Larry) Gaff. She leaves behind a legacy of 21 grandchildren and 32 great-grandchildren. She is also survived by her brothers and sisters, Bert, Iris, Norris, Roland, Janet, Jay and Dixie. Also numerous nieces, nephews, and other family members. She is predeceased by her parents, 7 siblings, 1 son-in-law, and 9 brothers and sisters-in-law. Delila grew up in Hill Spring and raised her family there. She instilled the importance of family to her children. She held many callings in the church and served them faithfully. She will be greatly missed and remembered. The Funeral Service will be held at The Church of Jesus Christ of Latter-day Saints, Hill Spring, Alberta on Saturday, February 7, 2015 at 3:00 pm.Friends may meet the family from 2:00 to 2:45 pm prior to the service.Interment to follow in the Hill Spring Cemetery.Email your condolences to legacycardston@gmail.com