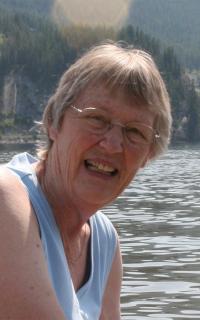 1938 ~ 2015
Frances Elaine Lyon of Lethbridge passed away peacefully on Saturday, February 7, 2015 at Edith Cavell Care Center following her courageous and inspiring battle with ALS. Her family and friends, and the entire staff of Cavell Court, will forever remember Fran for facing the disease with dignity, grace and kindness to all. She will be so tremendously missed, but we were all so blessed to have been with her on her journey and to have been a part of her life. Fran was born on August 20, 1938 to Lindsay \”Slim\” and Irene Reed of Springside, Saskatchewan. She and her older sister Elsie moved with the family to Lethbridge in 1948 and 4 years later they welcomed sister Judi. Lethbridge is where she met her future husband, Eric Franklin Lyon, and they were wed on August 11, 1962. In 1965, they welcomed their first daughter Gwen followed by Charlene in 1967. Fran was a stay-at-home-mom who enjoyed sewing, baking, knitting, square dancing and socializing with neighbors. After her beloved husband Eric passed away suddenly in 1978, she returned to the work-force supporting her girls and putting herself through college where her daughters proudly saw her graduate from the recreational therapy program at LCC. After graduation, she worked at The Lethbridge Senior Citizens Organization until her retirement in 2000. It was then that she returned to her favorite \”job\”, that of full-time mom and grandma. Also during this time, she devoted numerous volunteer hours to the Lethbridge Regional Hospital, Meals on Wheels and Little Lambs Christian Preschool as well as being an active member at Immanuel Lutheran Church. Fran’s kind, gentle, and genuine nature always attracted people to her and through her many family, social, church, and volunteer activities, she touched so many lives. Fran was predeceased by her husband Eric Lyon (1978), sister Elsie Stoeckel (1991), father Lindsay \”Slim\” Reed (1995), and mother Irene Reed (2013). Fran is survived by her sister Judith Reed (James Campbell), daughters Gwen Reimer (Harv), Charlene Lyon (Daryl Lindgren), and grandchildren Tasya Bajraktarevic, Brenden Lindgren, and Lauren and Alexa Reimer. She is also survived by sisters and brothers in law and numerous nieces and nephews. A Memorial Service will be held at 1:00 pm on Thursday, February 12, 2015 at IMMANUEL LUTHERAN CHURCH: 20 Rocky Mountain Boulevard West, Lethbridge, AB with Pastor Nathan Fuehrer, officiating. A family graveside service will precede the memorial and refreshments will be served in the church facilities following. Flowers are respectfully declined. Those who wish may make memorial donations to the ALS Society #250, 4723 — 1 Street SW Calgary, AB T2G-4Y8 or through www.alsab.ca. Send condolences at www.mbfunerals.com.

One Condolence for “LYON Frances”