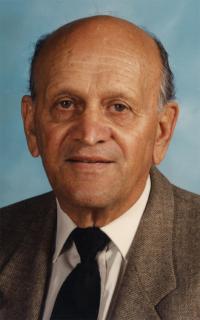 STEVE SLEMKO, of Coaldale, beloved husband of Frances Slemko, passed away at the Coaldale Long Term Care Centre on Saturday, February 14, 2015 at the age of 97 years. Steve is survived by his wife of 63 years, Frances; son Ken (Kathy), three daughters Mary Coles (Walter), Loretta Simmill (Kevin), Rosanna Stevens (Tom); grandchildren Ken Coles (Dana), Angela Hope (Nick), Mike Coles, Sarah and Kris Slemko, Steven Simmill (Kathy), Lisa Orton (Jeff), David Simmill (Brittany), Tom and James Funk; 9 great grandchildren; two brothers Pete (Diana) and Bill (Jean). Parents Sam and Pearl Slemko, siblings Anne, John and Mary predeceased him. Steve was born on September 13, 1917 in Coalhurst, AB but raised in Lethbridge until Grade 8 when his family moved to a farm in the Coaldale area. He really enjoyed life on the farm working and playing together as a family unit. He attended Garbutt Business College in Lethbridge and became a bookkeeper and stenographer. He enlisted in 1940 with the Southern Alberta Regiment and because of his training became the "little Radar O’Rielly" in a mobile armoured unit. He received his discharge in1946 and returned to Coaldale. He married Frances Wadden on June 30,1951, built a house on a farm in the Coaldale area and raised their four children. Steve farmed until 1971 when he became a county councillor for the County of Lethbridge. He and Frances developed many strong and lasting friendships within the county. Always steadfast in their faith, they joined the Sisters of St. Martha Association. Steve was secretary-treasurer of St.Joseph’s School from 1969-1994. He loved being around all the children and had a pocket full of coins to hand out. In recognition of his contribution to the community and country, Steve received Queen Elizabeth II Golden Jubilee and Diamond Jubilee medals. Steve and Frances travelled the world during their retirement years. His children and grandchildren always returned to the farm for holidays enjoying farm life, card playing and family games. Steve and Frances moved from the farm to a senior’s residence in Lethbridge in 2012 after Steve experienced deficits from a stroke. He will be remembered with a smile and greatly missed by his family and friends. Relatives and friends are invited to a Prayer Service at CORNERSTONE FUNERAL HOME, 2800 Mayor Magrath Drive South, Lethbridge, AB on Wednesday, February 18, 2015 at 7:30 P.M. with Father Newton Rodriquez officiating. The Funeral Mass will be Celebrated at ST. AMBROSE CATHOLIC CHURCH, 1513 – 23 Avenue, Coaldale, AB on Thursday, February 19, 2015 at 11:00 A.M. with Father Newton Rodriquez, Celebrant. A Private Family Interment will follow at the Coaldale Cemetery. In lieu of flowers, donations may be made in Steve\’s name to the Alberta Organ and Tissue Donation, C/O Southern Alberta Organ and Tissue Donation Program, Foothills Medical Centre, 1403 – 29 Street N.W., Calgary, AB, T2N 2T9

Leave a Condolence for Dennis and Katie Harder