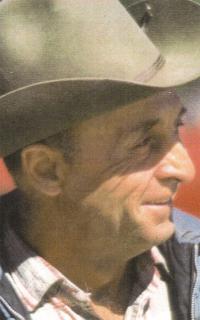 Alyre Antoine Therriault passed away peacefully in Pincher Creek on Wednesday February 11th, 2015 at the age of 94. Alyre was the second child of homesteaders Denis and Agnes Therriault. He was born on May 10th, 1920 on the family farm in the Robert Kerr District in the MD of Pincher Creek. Alyre attended boarding school at the Kermaria Convent for Grades 1 and 2 and then attended the one room Robert Kerr School for grades 3 till 9. Alyre and his brother Edwin went to school by horse and buggy during the summer months and by cutter during the winter. He boarded in town for grades 10 and 11 but returned to the family farm before completing Grade 12 as his father was in ill health. In 1937 Alyre purchased a John Deere Threshing machine, hiring a crew and contracted out for custom threshing. On October 18th 1954 he married Jacqueline Bechtel and they raised four children. Alyre began to raise a herd of Black Angus cattle that he was very proud of. Alyre was one of the original \”Big Ten\” – this was a group of 10 local ranchers that formed the Butcher Creek Grazing Association. Alyre also held a permit in Castle River Forest Reserve for over 60 years, and was also an original shareholder in Stoney Bar Grazing Association. Alyre was so proud to become a grandfather to nine wonderful grandchildren and a great grandfather to ten great-grandchildren. He loved family get togethers and playing Crib, Five Hundred and Shanghai Rummy with family and friends. He also had a love of music and dancing. Alyre was active in the community as a Trustee for St. Michaels RC School Division, a member of Western Stock Growers, United Grain Growers, Pincher Creek Lions, Pincher Creek Community Hall Board and the Pincher Creek Recreation Board. Alyre took great pride in his family – his heritage and his community. He is survived by his loving wife of 60 years Jacqueline; his daughter Marie (Jim) Cameron and children Scott, Michael, Jenny (Chris); daughter Audrey (Robert) Jackson and children Shari (Shaun), Robyn (Eric); daughter Jackie (Frank) Marsh and children Jerett (Kathryn), Nicole (Dylan), Kelsey (Adam) and son Tim (Jan) Therriault. He is also survived by one sister Jeannette Therriault of Fairbanks, Alaska and Sister-in-law Sally(Doug) Connelly. He was predeceased by his parents Denis and Agnes Therriault his brothers Edwin and Patrick and sisters Kathleen Poff and Agnes Fischbuch. A Prayer service will be held at 7:00 P.M. on Thursday February 19, 2015 AT ST. MICHAEL’S CATHOLIC CHURCH, 958 Christie Avenue, Pincher Creek, AB. A memorial mass will be held at 1:00 P.M. on Friday February 20, 2015 at ST. MICHAEL’S CATHOLIC CHURCH, 958 Christie Avenue, Pincher Creek, AB, With Father Silvano Vargas Celebrant. Donations may be made to the Windy Slopes Health Foundation (Palliative Care Unit), PO Box 2554, Pincher Creek, AB, T0K 1W0.

One Condolence for “THERRIAULT Alyre”