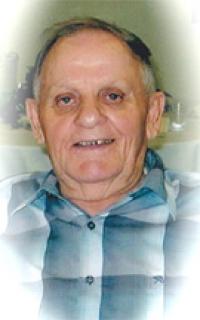 August 12,1932 — February 21, 2015
Husband ~ Father ~ Grandfather ~
Great Grandfather
It is with great sadness and a heavy heart that we announce the peaceful passing of STEVE BARTOSEK at the age of 82 years. Steve was born and raised in Raymond, Alberta where he also met his wife of 61 years, Arlene. Steve and Arlene were married in 1953 and added two daughters, Pauline and Cindy, to complete their family. As a family they moved to Lethbridge in 1964. Steve then worked for Canadian Western Natural Gas for 35-plus years until retiring in 1993. Steve enjoyed playing hockey and baseball in his younger years and his love of sports would continue as he watched his children, grandchildren and even great grandchildren participate in various activities. He was their biggest and loudest supporter. He had an infectious smile, a great laugh and infinite amounts of love and loyalty to his family. Steve enjoyed his time with his family especially when surrounded by them in his backyard for any reason to celebrate. Steve spent his retirement years \”bummin’\”, \”seeing a man about a dog\” and \”going for coffee\”. Steve is survived by his wife Arlene; daughter Pauline (Mo) Rusling; son-in-law Les Skretting; grandchildren: Shauna (Craig) Johns, Jaclyn (Steve) Hartwick, Karlene (TJ Quinton), Logan, Landon and Clayson Skretting; and four great grandchildren: Austin and Conner Hartwick, Bryden and Cassidy Johns. He was predeceased by his dear daughter Cindy. Steve will be greatly missed by his family, extended family and the many people he has touched over the years. A Celebration of Life will be held on Thursday, February 26, 2015 at 11:00 a.m. at CHRISTENSEN SALMON GENERATIONS FUNERAL HOME, 703-13 Street North, Lethbridge. In lieu of flowers, memorial donations may be made to KidSport Lethbridge and Taber, 1001-3 Avenue South, Lethbridge, AB T1J 0J3.

One Condolence for “BARTOSEK Steve”