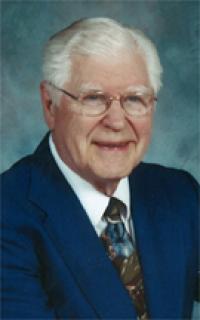 1924 ~ 2015
Francis Gordon \”Gordie\” Gore-Hickman passed away at the Lethbridge Regional Hospital on February 17, 2015 at 90 years of age with his sons by his side. Gordie was born on April 8, 1924 in Grimsby, England, and immigrated to Canada with his family in 1925. He attended high school in Red Deer, and completed one year of undergraduate studies at the University of Alberta before joining the army in 1943. After the war, he returned to the U of A, where he earned his BSc in 1948, and MD in 1950. While working as an intern at the Royal Alexandra Hospital in Edmonton, he met a nurse named Luella Bright, and they were married in June 1952. Gordie completed his specialty in Pediatrics at the Vancouver General Hospital, and in 1958 he joined the Campbell Clinic in Lethbridge, where he enjoyed a successful career that spanned 31 years of caring for children in southern Alberta. Gordie and Lu celebrated their 50th wedding anniversary shortly before Lu passed away in 2002. During his medical career, he served as Chief of Pediatrics at the Lethbridge Regional Hospital from 1969 to 1984 and St. Michael’s Hospital from 1985 to 1989. Gordie was active in the Alberta Pediatric Society and the North Pacific Pediatric Society, and was President of the U of A Medical School Alumni Association. He served on the Child Health Committee for the Province of Alberta for 10 years, and was awarded lifetime membership in both the Alberta Medical Association and Canadian Medical Association. Gordie also served his community in other ways. He was very active in the Lethbridge Shrine Club. He served as Chairman of the Child Health Care Committee, assessing children for eligibility, and arranging for their care at Shriners Hospitals across North America. As a Shriner, he also rode his motorcycle in countless summertime parades throughout southern Alberta. Gordie enjoyed boating and relaxing at the family cottage at Little Bow Provincial Park. He was an avid sports fan, and particularly loved to watch hockey, football, golf and curling. He was a member at the Lethbridge Country Club and the Curling Club, and took much pride in having scored both a hole-in-one and an eight-ender. Gordie is survived by his brother Desmond (Eunice); sister Moyra Baize (Ted); sons Tim (Heather) and Ron (Barbara); six granddaughters, Shaunna MacNeil (Chris), Erin, Emily, Christy, Mackenzie and Lauren; and two great-grandchildren, Ashley and Riley. He was predeceased by his sister Megan, wife Luella and his eldest son Bill. Gordie was a loving and devoted husband and father, blessed with a full and happy life in spite of its challenges. He was also blessed with a compassionate spirit that enabled him to touch many lives in his kind and caring way. A Funeral Service will be held at 1:00 pm, on Thursday, February 26, 2015 at ST. AUGUSTINE’S ANGLICAN CHURCH, 411 — 11 Street South, Lethbridge, with Canon James Robinson, officiating. In lieu of flowers, donations can be made to the Heart and Stroke Foundation of Alberta, Box 2211, Lethbridge, AB T1J 4K7. Send condolences at www.mbfunerals.com.