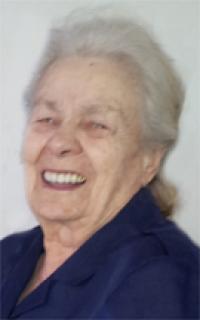 1927 ~ 2015
Krystyna Janina Tomaszewski of Bow Island, Alberta, passed away peacefully on Feb 22, 2015 at the age of 87 years. Krystyna was born near Krakow, Poland, where she went to school. It was near there, during the Second World War, where Krystyna would meet Stanley, and eventually marry before the war\’s end. Shortly afterwards, they moved to West Germany, where they had their first child, Teresa. Then in 1949, they emigrated to San Paulo, Brazil, where she worked as a seamstress, and gave birth to their second child, Tony. After 9 years in Brazil, they eventually made their final move to Bow Island in 1957, where shortly after, they had their third child Rick. Mom kept busy raising her children, and went to school to get her diploma in hair styling. She then opened up a beauty salon in her house. Mom ran a very successful business from her home from the early 70\’s until the mid 80\’s, when she retired to spend full time with her family. Among the many fond memories that the grandchildren have of Grandma, some that stand out the most were her love of gardening, and her many famous recipes she cooked over the years, especially the \”red\” rice and raspberry juice that everyone loved. Krystyna is survived by two sons: Tony and Rick (Debbie), Grandchildren, Joanna Darling (Ron) and Susanne Jin (Santo), Jason (Katherine) and Jeff (Melissa Merideth), Erin Ryland (Ben) and Ian (Jessica Malynyk) along with great grandchildren Ayden and Juliessa Jin, and Kristina and Sawyer. She was predeceased by her loving husband, Stanley, her daughter Teresa Last (John), grandson James Last, her parents, Mr. and Mrs. Siembida, two sisters and a brother. A Funeral Service will be held at 11:00 am on Friday, February 27, 2015 at ST. MICHAEL’S CATHOLIC CHURCH, 1113 1st Street East, Bow Island, AB with Father Fred Monk, officiating. Send condolences at www.mbfunerals.com