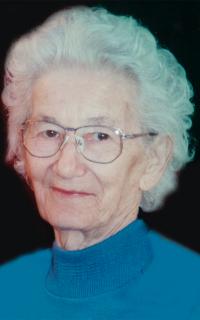 1925 ~ 2015
Mrs. Marija \”Marica\” Birus passed away peacefully in the family home with her loved ones by her side on Monday, March 2nd, 2015 at the age of 89 years. Marija was born on September 21st, 1925 in Hra__e, Croatia where she was educated, married and raised her daughter Katica \”Kathy\”. At 46 years of age, Marija relocated to Germany and began working as a caregiver at a senior’s home. After four years, Marija joined her daughter Katica in Lethbridge, Alberta, Canada in November of 1975. Marija continued in her role as a caregiver; however, this time she focused on raising her grandchildren Crystal and Robert, and eventually her great grandchildren who were her pride and joy. Marija was not just a grandmother to her grandchildren but became everyone’s Baka (grandma). She was extremely fond of the outdoors and truly loved to garden taking particular delight in her home grown tomatoes and geraniums. She will be deeply missed by her daughter Katica (Mirko) Kain, along with her two grandchildren Crystal (Gregory) Lothian, Robert (Alexandra) Kain; her four great grandchildren Finley, Calyn, Harrison, and Jasper; and the numerous cousins, nieces, nephews, and their families here and abroad. Besides her husband Josip Birus, Marija is predeceased by her parents Ivan and Anna Rozic, brothers Rudolp Rozic and Drago Rozic, and sister Kata Rozic. Prayers will be held at 7:00 pm, on Thursday, March 5th, 2015 at MARTIN BROTHERS RIVERVIEW CHAPEL, 610 — 4th Street South, Lethbridge, AB. A Funeral Mass will be celebrated at 11:00 am, on Friday, March 6th, 2015, at ST. MARTHA’S PARISH, 355 Columbia Blvd West, Lethbridge, AB, with Father Vladic officiating. Interment to follow at Mountain View Cemetery. Visit www.mbfunerals.com to send a private condolence.