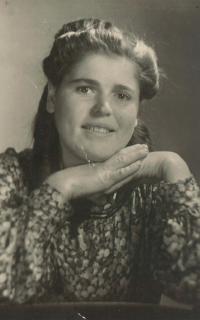 1918 ~ 2015
Mrs. Maria Marta Schnitzer (Pazniakova) of Lethbridge, beloved wife of the late Mr. Kazimierz Schnitzer, passed away on Tuesday, March 3, 2015 at the age of 96 years. Maria was born in Kalmykow, Russia on August 12, 1918. At the age of 6 months her father, an officer in the Czar’s Cossack Guard, was executed by the Bolsheviks. Her mother Paula Broskowiak died from pneumonia when Maria was 2 years old. Her brother Bogdan died in 1928 at the age of 14 by accidental drowning. Raised by her grandparents, she left home at 16 and worked as a cook and waitress in the mining town of Dundas. Moving to Stalingrad (Moscow) in 1938, she escaped during the German siege of 1943. She was captured and taken for slave labour at a German farm where she met her husband Kazimierz, also a captive slave labourer. At the end of the war they were sequestered at a refugee camp in the French quadrant of occupied Germany this is where their son Joseph was born. After 4 years they were allowed to immigrate to Canada in 1950, landing in Halifax in May and carrying on to Lethbridge, AB by CP rail. 1950 was and is the coldest winter on record in Western Canada and this is when they began their two year contract as farm workers to pay for their passage. For 26 years Maria worked as a custodian for the Public School Board, mostly at the old Westminster Elementary school, until her retirement in 1983. Mary was predeceased by ‘Kaz’, her husband of 65 years. She is survived by her daughter Helen Soucie; sons Edward and Joseph (Gayle); also left behind are three grandchildren Christina, Janine and Jason (Sonia); and 3 great-grandsons Kaz, Boden and Kaleb. Family and friends are invited to pay their respects at 11:00 am on Monday, March 9, 2015 at MARTIN BROTHERS RIVERVIEW CHAPEL, 610 — 4 Street South, Lethbridge, followed by a Graveside Service at 11:30 pm in the Mountain View Cemetery. In lieu of flowers, Maria asked that a donation may be made to the Hearts and Stroke Foundation of Alberta, Box 2211 Lethbridge, AB T1J 4K7 or www.heartandstroke.ac.ca. Visit www.mbfunerals.com to send a private condolence.