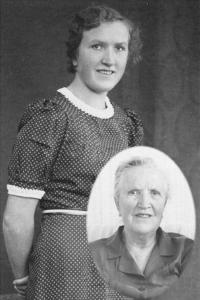 1921 ~ 2015
Meta Fritz (nee Steuer) died in her home with loved ones by her side on March 9, 2015. She was 93. Meta was born on April 3, 1921 in Schoenwalde, Kreis Graudenz, Marienwerder Preussen (West Prussia) to Friedrich and Amanda Steuer (nee Eschner) as the fifth of six children. She married Otto Fritz in Bielefeld, West Germany in 1948. The Fritz family moved to Canada in 1955 and settled in Lethbridge where they raised a family and built a masonry construction business together. Meta is survived by three daughters, one son and their spouses: Doris (Almut) and Denis Chalifoux of Spruce Grove and their children Julian and Simona; Sigrid Fritz and Jim Savage of Stony Plain; Karol Fritz and Rick Dembicki of Calgary and their children Lisa and Jared; Al and Karen Fritz of Lethbridge and their children Jenny (husband Matt and son Isaac), Josh and Dustin. She is predeceased in 2006 by her husband, Otto. A service commemorating Meta\’s life will be held at 11:00 am on Saturday, March 14, 2015 at PARK MEADOWS BAPTIST CHURCH, 2011 – 15th Avenue North, Lethbridge, Pastors Barry Seifert and Lorne Willms presiding. In lieu of flowers donations can be made to \”Park Meadows Baptist Church\” indicating \”Kenya Mission\” on the memo line, donations will be to support the Oloika Pentecostal Church in Kenya, 2011 – 15th Avenue North, Lethbridge, AB T1H 5J4. Visit www.mbfunerals.com to send a private condolence.