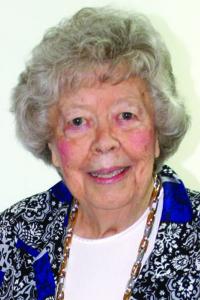 Eveline Edgar, beloved wife of the late John (Jack) Edgar passed away in Lethbridge on March 10, 2015 at the age of 91. Eveline was born in Newcastle upon Tyne on December 24, 1923 but spent her early years in South Africa where her father was a mining engineer. She attended school in Newcastle. When World War II started, Eveline, her mother, also Eveline, and brother, Arnold, moved to the small inland village of Allendale where she met and married Jack Edgar, a member of the Canadian Air Force, from Fort Macleod in January 6, 1945. Eveline, along with thousands of other war brides, made the journey to Canada in 1946. Jack and Eveline farmed in the Allenfields District south of Macleod until they retired in 1978. Eveline and Jack enjoyed a rich and happy retirement which included travel to Europe and Israel, Asia and Australia and New Zealand, activities associated with Trinity United Church, square dancing, volunteering and, especially, the company of friends. Eveline was active in the United Church and the UCW United Church Women, fulfilling the responsibilities of varied offices over the years. She was also a charter member of the Country Beavers, a women’s group founded by the farm wives of South Macleod. Another association that was dear to her heart was the Alberta War Brides Association. Eveline was predeceased by her husband, Jack, and her brothers and sisters-in-law, Nancy (Gemmell), Winnie (Lockard), Alan, Norman, Wilfred and Connie (Hoffman/Henker), her brother, Arnold Warwick and sister-in-law, Sheila. Eveline is survived by her children, John and Joy (Murillo), granddaughter, Selena Murillo and great grandson, Elijah Dokis as well as numerous nieces, nephews and cousins and their families. A Memorial Service will be held at 2:00 P.M. on Friday March 20, 2015 at The TRINITY UNITED CHURCH 220 — 20th St, Fort Macleod, AB with reverend Eras Van Zyl Officiating. If friends desire, memorial donations may be made in Eveline’s memory to the Fort Macleod Handi-Bus, Box 881, Fort Macleod, AB, T0L 0Z0.