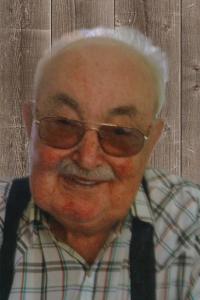 ALEXANDER LOUIS NAGY, beloved husband of the late Ethel Barna, of Lethbridge, passed away at the Chinook Regional Hospital with his family by his side following a brief illness on Monday, March 16, 2015 at the age of 91 years. Alexander had a rare kind of love and a firm but loving heart. He gave abundantly to others expecting noting in return. He was an excellent gardener, taking great pride of his grape vines and always waited in anticipation for the fall harvest. Alexander was born on March 5 1924 in Felnemet, Hungary, where he lived until 1938. At the age of 14, Alexander immigrated to Canada with his mother. They reunited with his father in Raymond, AB, where they all worked together as laborers, until the time they could purchase their first parcel of land at Stewart Siding. In 1946, Alexander married (Mary Ramias) and together they raised five children. Alexander retired in 1980 and spent several years travelling back to Hungary, 6 months at a time. Alexander loved the road trips he took with family to Northern Montana, and to numerous spas in B.C. \”You are Forever in our Hearts\”. He is the loving father of John Nagy of Edmonton, Violet (Joe Bilodeau) Knox of Lethbridge, Darlene (Ralph) Kowal of Lethbridge, Diane (Don) Tedesco of Lethbridge, grandchildren; Pam (Shaun) Serafini, Jennifer (Jason) Ellerman, Patrick Knox (Rachel Jones), Jason (Nicole) Kowal, Cathy (Keith) Venhuis, Breanne Kowal, Bailey Kowal, Darcy Nagy, Kerri Nagy-Bobinec, Douglas Nagy and Charon Nagy as well as numerous great-grandchildren. Besides his first wife Mary Nagy, he is predeceased by his parents John and Priscilla Nagy, sister Margaret Nagy and son Les Nagy. A Prayer Service will be held at CORNERSTONE FUNERAL HOME, 2800 Mayor Magrath Drive South, Lethbridge on Thursday, March 19, 2015 at 7:00 P.M. with Sharon Hagel, Prayer Leader. A Funeral Service will be held at CORNERSTONE FUNERAL HOME, on Friday, March 20, 2015 at 10:00 A.M. with Deacon Ray and Ellen Wagner officiating. Interment to follow at Mountain View Cemetery. In memory of Alexander, donations may be made to the Heart & Stroke Foundation, P.O. Box 2211, Lethbridge, AB, T1J 4K7 or the Royal Canadian Legion General Stewart Branch #4, 324 Mayor Magrath Drive South, Lethbridge, AB, T1J 3L7