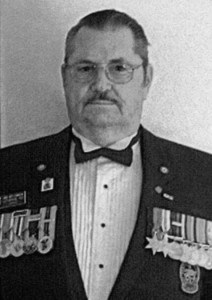 Mr. Hubert Stubbington of Lethbridge, beloved companion of Ms. Mariel Selk, passed away on Wednesday, March 25, 2015 at the age of 90 years. Bert was born on March 22, 1925 in Empress, Alberta. In 1930 he moved to Glaslyn, Saskatchewan in a covered wagon. He attended school at Fernwood for four years and returned to Empress. In 1936, he returned to Glaslyn, Saskatchewan where he worked on many farms and ranches until 1939, when he then moved to East Coulee, Alberta where he worked in the coal mines. In 1942, Bert joined the Army and served in WWII. On D Day, he landed on Juno Beach and on July 25 he was taken as a Prisoner of War. In 1945, he returned to Canada and was discharged. In 1950, he re-enlisted, and in April of 1953 deployed to Korea. From 1954 – 1961 he served as Military Police Officer, and was then discharged. He was the Superintendent of security for the Edmonton Exhibition and Western Canada Racing Association. Bert served as a police officer over the years in various cities and towns, such as Athabasca, Sylvan Lake, and Warner. In 1974 they moved to Lethbridge and he worked as commissionaire and started volunteer work with neighborhood watch until retirement. Bert is survived by his daughter Sharon Fisette; sons Jerry (Carla) Stubbington, David (Karen) Stubbington and Daryl Stubbington; step-children Sharon (Steve) Ivanics, Marianne (Gary) Paskuski, Barry, Dave, Danny, Roger, Tom, Alan (Penny); sister Daphne Courtney; and several grandchildren and numerous nieces and nephews. He was predeceased by his three brothers Victor, Wilfred and Brian; his three sisters Margorie, Yvonne and Dorothy; step-daughter Kathy Selk Esslinger. A Private family Graveside Service will be held at Mountain View Cemetery in the Field of Honour. Visit www.mbfunerals.com to send a private condolence.

One Condolence for “STUBBINGTON Hubert”