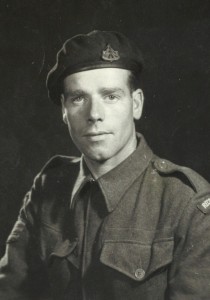 Mr. George Glatley, beloved husband of the late Erna Glatley passed away peacefully on Thursday, March 26, 2015 at the age of 95 years. George was born in Glasgow, Scotland and joined the British Army at a young age as part of the Signal Corp. During WWII he was engaged in battles from Dunkirk, Africa, Italy and was part of the Occupational Forces in Germany, where he met his beloved wife Erna. Erna & George were married on April 18, 1948 in Germany, settling in Scotland. George, Erna and their young family of three children immigrated to Canada in 1952 where he had joined the Canadian Forces as part of the Lord Strathcona Horse Regiment where he remained until his retirement from the Army. George had a passion for music and enjoyed playing harmonica at family functions. His legacy to his family is one of music. One of his greatest personal achievements was obtaining his B.A. from the University of Athabasca at the age of 81 years. George and Erna had eight children, whom they loved dearly and suffered when two died at an early age. He was very proud of every one of them including his grandchildren & great- grandchildren. We will miss him, and memories of our happy times together are stored in our hearts and minds forever. A private family service will be held. In lieu of flowers, memorial donations may be made to the Alzheimer’s Society, #402-740-4th Avenue South, Lethbridge, Alberta T1J 0N9. Visit www.mbfunerals.com to send a private condolence.