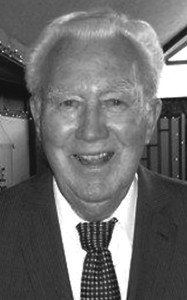 Eric was born in Schedlisken (Germany) on February 16, 1925 to Ida Zerbe of the Euchraine and Adam Hohm of Poland and came to Canada at the age of three years to “Hillfarm” near Lemberg, Saskatchewan. The family (consisting of parents a younger brother Irvin, born 1927 (deceased 1992) moved to Abernethy, SK. Summers were spent working for farmers in the area. His sister, Lillian, born in Abernethy in 1930 now deceased in 1962.

Eric joined the RCAF and graduated as Wireless Air Gunner. In 1946 Eric obtained a job with PFRA (Prairie Farmers Rehabilitation Association), working on the building of the St. Mary Irrigation Dam. He spent several months at the South Saskatchewan Dam supervising the grouting. Eric became an Inspector and Maintenance Superintendent of the dams and canals in the area of St. Mary Dam.

On July 16, 1952, he married Mary Yvonne Turner. Eric retired in 1981 and they moved to an acreage southwest of Magrath. They had three children: Gordon, deceased in 2014 (Cathy), Shari (Fern) and Roger (Fran).