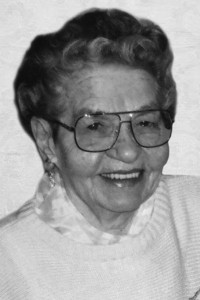 CAROL HELEN LARSON (nee Pipe), passed away at the Milk River Health Centre on Monday, April 27, 2015 at the age of 92 years.

She was predeceased by her beloved husband, John Lourien Larson.

Carol, who was also known as “Seedies”, was born in Calgary on December 25th, 1922 in a small house south of the Stampede grounds. She was a true Calgarian and loved her city. Carol, along with her sisters, became quite well known as the “Pipe Sisters” who sang at various venues in the city.

During the Second World War, they sang at military bases across Alberta for our troops and soldiers from the Commonwealth who trained here. Carol was adventurous and along with her sister and two friends, rode in a caboose to Mission City, B.C. to make money picking berries. There, she met the love of her life, John (Lars) Lourien Larson, which created the second greatest love of her life, her daughter Carolyn Fitch. In 1960, she returned to Calgary where she worked for many years in the hospitality industry, eventually becoming senior management for Phil’s Pancake Houses and traveling around to many of their locations. In 1967, she moved to Red Deer, continuing to work as management in the hospitality industry at the Red Deer Lodge. In 1987, she and her daughter Carolyn moved to Canmore to take over management of the Akai Motel and hosted people from around the world during the Olympics.

In 1994, they left the Akai and moved to Milk River, AB. Carol always considered herself a “Prairie Girl” and in picking a final place to reside, she chose Milk River with its open sunny skies, beautiful sunsets and the Sweet Grass Hills. She enjoyed small town life with its friendly people.

Carol appreciated life and loved it to the fullest. Her life was full of work which she relished, laughter, singing, and dancing which she truly enjoyed, and spending time with her family whom she loved dearly.

A Celebration of Life will be held at ST. PAUL’S UNITED CHURCH, 201 – 2nd Avenue N.E., Milk River, AB on Saturday, May 2, 2015 at 1:00 P.M. with Pastor Glenda Wert officiating. An Interment Service will follow at the Milk River Cemetery.