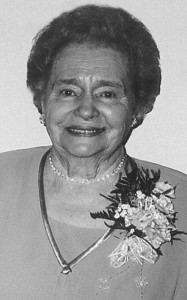 Mrs. Jolane Molnar of Lethbridge, beloved wife of the late Mr. George Molnar, passed away suddenly on May 3, 2015 at the age of 93 years.

Jolane was born in Hungary on December 9, 1921 to Julius and Mary Gal. At age 16 she immigrated to Canada with her family. She met and married her love George Molnar and had two children. Jolane was an active member in the Seniors Community including the Norbridge Seniors, she was also a member of the Fraternal Order of the Eagles and the Army Navy and Airforce Veterans Club.

Jolane will be dearly missed by all who knew her.

One Condolence for “MOLNAR Jolane”

Leave a Condolence for Ron McTavish