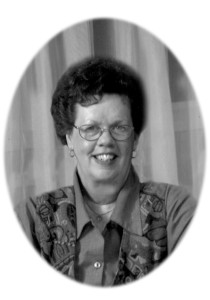 LYNN OLDRIDGE, our dear wife, mother, and grandmother passed away peacefully at the St. Michael’s Palliative Care Unit in Lethbridge, AB on Tuesday, May 12, 2015 at the age of 72 years after a courageous battle with ALS.

Lynn (nee Taylor) was born in Vancouver, B.C. on October 5, 1942. She is survived by her loving husband Ron, daughter Sue Cox and two grandchildren Erik and Anni;Son Mike and his wife Sue are both high school teachers at Pitt Meadows Secondary in the Lower Mainland. Lynn is also the birth mother to Brenda Mercer and grandson Levi of Victoria, B.C. She is also survived by her sister-in-law, Evelyn Fritz of Tillsonburg, ON, niece Gail Van Rietvelde and many relatives there and her first cousin, Myrna Howard of Thunder Bay, ON. Lynn had a great sense of humor which she shared with her family and close friends including Suzie and Ed Polinsky of Victoria, B.C., Lynn Stevens of Vancouver, B.C., Art and Sue Mortimer of Sparwood, B.C., and Lu Babe of Lethbridge, AB.

Rita Taylor, her beloved mother (deceased) decided that “baby” should be born in Vancouver, so Rita, who was stationed in Truro, N.S. with Lynn’s father Eric Taylor (deceased), got on the train and traveled to Vancouver to get her wish.

Lynn lived most of her life in Victoria, went to school there and in her words “didn’t learn much!” In 1960, while still in high school, Lynn and 200 other high school students traveled to Europe for that summer. Lynn also enjoyed being a member of the Victoria Girls Drill Team.

In June 1965, Lynn decided to leave her job at HMC Dockyard and went to Ottawa to join External Affairs. It was there she met Ron and they married in 1966, having 49 happy years together. Their two children were born in Mexico City during Ron’s 3-year posting. The family relocated to Victoria in 1970.

Lynn was an avid figure skating fan, having learned to skate as a child and participate in the Victoria Figure Skating Shows at Memorial Arena. In later years, she followed the figure skating competitions and her favorite was Kurt Browning.

In December 1976, Lynn joined the staff at Royal Jubilee Hospital in Victoria and worked there until retirement. Her last 12 years were spent on Homer 2, a psycho-geriatric ward where she arranged the activities for the patients as a Rehab Assistant. She always felt she was the winner as she learned so much from those patients.

In October 1992, Lynn won a brand-new red BMW convertible in the hospital lottery and cherished her car until the end.

After Ron retired in 2002, they decided to move to Lethbridge to be closer to their daughter Sue and her family. In November 2003, Lynn began volunteering in the reading program at the Dr. Gerald Probe Elementary School. Years followed with many happy memories, helping these young people learn to read.

Being an asthmatic for many years, Lynn appreciated the dry air of Southern Alberta, and her idea of a good time was to go for a walk to Riverstone and pick up the garbage dropped by the wind.

In September 2006, Lynn began an Avon route. She began to meet her neighbours and help them choose Avon products. When people asked “How did you do so well with Avon,” Lynn would reply, “I did it with my winning personality.”

A special thanks to the ambulance attendants and Dr. Latchmea and nurses of Ward 4C of the Chinook Regional Hospital and St. Michael’s Palliative Care Unit.

Celebrations of Lynn’s Life will be arranged at a later date for both Lethbridge and Victoria locations. Lynn will rest in peace in a plot next to her grandmother, Cheri, near Cedar on Vancouver Island.